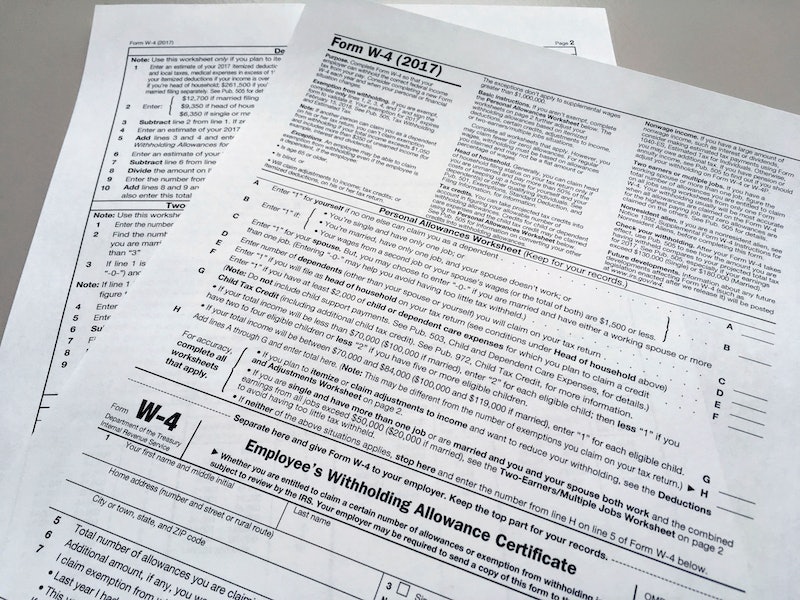 The tax law signed by President Trump in 2017 resulted in a complete rewriting of the the W-4 form, the standard tax form workers fill out for employers before getting hired. The new W-4 form changes are quite extensive, and will likely make your life a whole lot harder — but luckily, the IRS won't be using the new forms until the 2020 tax season, according to USA Today.

Although the final version of the new form hasn't yet been released, a draft version was released over the summer, and it requires employees to fill out far more information than on the old W-4. In the draft version, employees must provide annual dollar amounts of the following, according to USA Today:

The new form references no fewer than 12 other forms that employees may have to refer to in order complete their W-4, according to USA Today.

Jean C. Nelsen, president of the National Association of Enrolled Agents (NAEA), wrote a letter to the IRS in 2018 expressing concern over the new draft of the W-4, Forbes reported.

“If taxpayers and employers are forced to use Forms W-4 that are difficult to understand and require taxpayers to disclose personal information, we should expect unpleasant (or catastrophic) surprises in early 2020 when taxpayers determine the liabilities of their post-[tax-reform law] Form 1040," Nelsen wrote in a letter to David Kautter, then the acting IRS commissioner, according to Accounting Web. "[W]e are concerned the new form both increases complexity (by an order of magnitude) and, in many cases, decreases accuracy."

Nelsen said that the new tax form, in addition to being overly complex, requires taxpayers to forecast certain annual expenditures — such as work-related child health care expenses — that are difficult for most people to predict ahead of time. Moreover, certain miscalculations on the taxpayer's part could cause "wild swings" in the amount that's withheld, Nelsen warned, resulting in significant inaccuracies in withholding.

Finally, Nelsen said that the form raises privacy concerns, as employees may not want to give their new employers information about their second jobs or their spouse's income.

The IRS expects to release another draft version of the new W-4 by May 31, USA Today reports; like the last draft, it will be submitted for public comment. The final version will be unveiled by the end of the year, and taxpayers will be required to use it in 2020 and beyond.