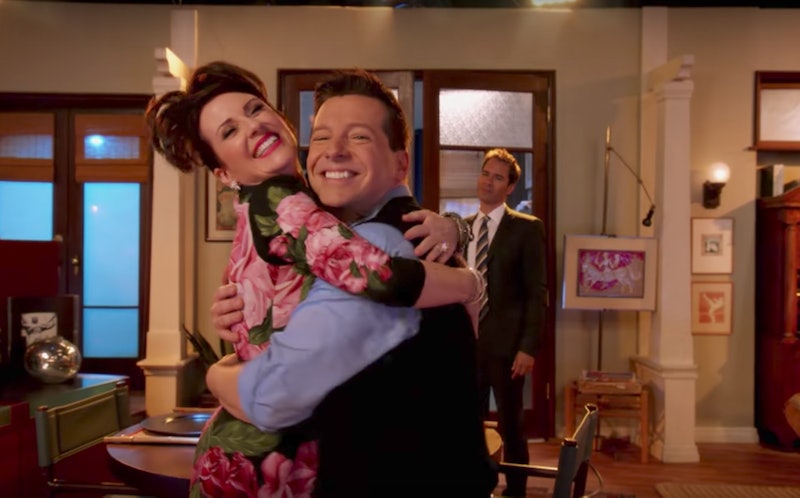 On Monday, Jack, Will and Karen convinced a doubtful Grace to do a Season 12 of Will & Grace, resulting in a fan-approved musical masterpiece. Yes, the new Will & Grace trailer is a musical, because... why not? If you've been waiting since 2006 for the cast to make their return, you're in luck, but there's no promising that the revival will be as musically inclined as their latest promo. The quartet made a melodic announcement that they will be reuniting this Fall on NBC for an exclusive 12-episode event following the official teaser that debuted shortly before.

Will & Grace is a 16-time Emmy winner about a successful business woman living with her friend in New York City, mismanaging their love lives and sharing wise cracks. Principal actors Eric McCormack, Megan Mullally, Sean Hayes, and Debra Messing will be coming to living rooms everywhere under the longtime direction of James Burrows.

The dramatic musical trailer didn't give us any real indication of whether or not they'd be singing into the new season, but it sounds to me like it could be a pitch-perfect reunion. Maybe we'll get a song out of them the first episode? While there's no confirmation of what we can expect from these four, we can see our boisterous bunch hasn't changed a bit in the latest trailer. Karen is still toting her dirty martini and Jack is still peddling through new ways to entice men.

Prep the drinks and gather the gals. After 11 years, we're finally getting to cozy back into the apartment we grew up with. Here's hoping the cast isn't tone deaf when it comes to bringing back the same energy we fell in love with.