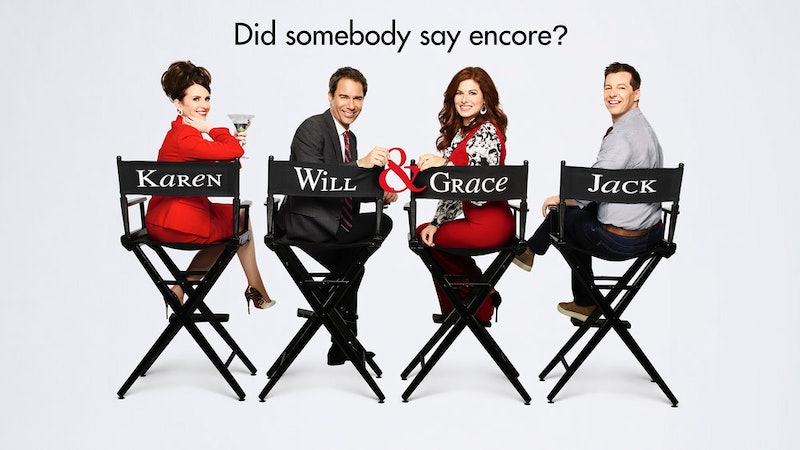 If you feel like you're suffering from reboot fatigue, this short, but oh-so-sweet, Will & Grace revival teaser will snap you right out of it. Will, Grace, Karen, and Jack are all back and ready to continue their acerbic adventures in life and love. The teaser promises a full trailer is coming on Monday, May 12, but the behind the scenes glimpse of the cast all laughing together in Will's iconic apartment is just too charming to be ignored.

Sure, there are plenty of arguments to be made about how '90s nostalgia is overrated, but sometimes seeing your favorite TV characters reunite is the perfect escape from the world's current calamities. When Debra Messing, Eric McCormack, Sean Hayes, and Megan Mullally reunited for a Get Out the Vote skit in 2016, it was clear the cast's special connection was still intact, and the new teaser seems to confirm it wasn't an isolated slice of brilliance.

All of the actors appear to be genuinely excited to be bringing their iconic quartet back together again. And, I for one, am beyond excited to see what the 12-episode revival brings. Will & Grace was a superb hangout comedy that was more about the expert sarcasm the characters' could exchange and the ridiculous situations they could get themselves into than anything else. The teaser doesn't drop the slightest hint about what's ahead in terms of story, and that's fine — as long as the cast's chemistry is as dynamic as it was when the last episode aired in 2006, the revival will have everything it needs.

The teaser is pure nostalgia fuel and that's totally OK. There's nothing wrong with the gang recapturing that '90s and early '00s feeling. Honestly, doesn't everyone need a little reminder of simpler times? Even if they were only simpler because you were likely still eating Lunchables and watching SNICK religiously. Embrace the warm and fuzzy feeling of seeing Messing holding onto Hayes' hand as they prepare for the cameras to start to roll — the Will & Grace revival is certainly a luxury, and not a necessity, but it's one the world deserves.

In just a few months time, Will, Grace, Jack, and Karen will be cracking wise about everything from politics to their sure-to-be still complex love lives, and oh, honey, I believe it's going to be fabulous.