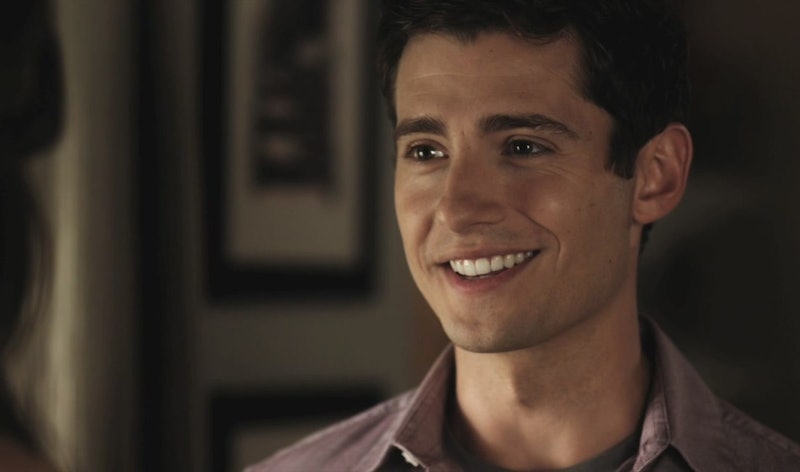 Stop press: there are new stills of Wren, I repeat, new stills of Wren. Caught your breath? OK, great. Entertainment Weekly published some very intriguing images of everyone's favorite slippery Brit on the show — but what do the new photos of Wren mean for Pretty Little Liars? Arguably, kind of a lot. First of all, frickin' finally, right? As Entertainment Weekly has noted, this is the first time we've seen Wren on the show since way back when in 2013.

But, if you watched the last installments of Pretty Little Liars, you'll know that they've been dangling a return of Julian Morris, who plays Wren, like an enormous (and admittedly easy-on-the-eye) carrot for viewers. In Season 6, Episode 17 we got a discussion about Wren that seemed to suggest that maybe he wasn't a baddie after all. We learned that, two years ago, Hanna had run into Melissa in London, and she found out that Melissa and Wren had broken up because of Charlotte, because Charlotte and Wren had talked about Melissa. It really didn't get any more specific than that, promise.

But it did pose an interesting new angle: if Wren broke up with Melissa because he learned new information about her from Charlotte, did that imply that Wren had learned that Melissa had done something horrible and broke things off out of sheer disgust? In short: was Wren an unlikely new moral compass for the show?

But then, on seeing this image, I'm confused all over again. The buzzcut and the metal chair suggested one clear location: jail. But then again, they don't put lemons in your water in jail. This said, it still looks too bleak to be a cafe or a restaurant. Could Wren be at a university cafeteria, perhaps? Although, this still wouldn't explain the buzzcut.

As is popularly acknowledged, a buzzcut in pop culture is often used as shorthand for a character suffering from mental health issues. This isn't particularly accurate. Anyone of any state of mind can shave their head. But movies and TV often use a buzzcut to signal someone has suffered from a manic episode.

So perhaps a more Pretty Little Liars-consistent explanation for the photo would be that Wren has gone from treating mental health issues to being a patient in a high-end mental health institution. After all, the show has a lot of love for putting its characters in mental health facilities. Mona, Spencer, Charlotte and even Alison all spent time being treated for psychic disturbances. Why not Wren, too?

Another image shows Ezra and Spencer in the same location with Wren, and Ezra shaking Wren's hand. This is more telling, since in an interview with Morris, he revealed he'd promised showrunner Marlene King that he would "return at some point in the season to resolve my character — for myself and also for the fans." He also said:

What I would love is some resolution with Spencer. I always thought — and this is how I played it — that he was in love with and loved Spencer, so it would be great to resolve that.

Given that Spencer is currently the only Liar who doesn't have an obvious romantic end game, could the show's ultimate twist be giving her a happily ever after with a character who's been positioned as a possible accomplice to A since way back when?

So here's me calling it: Wren had some involvement with the plot against the Liars, but, on learning more about what this meant for the girls from his conversation with Charlotte, was so traumatized that he ended up needing mental health care. Cue a better, more honest Wren and (once he's well, obviously) the perfect candidate for Spencer's heart. Fingers crossed. Because, while Toby is cute, Wren's got that accent. I am but human. Don't ask me to root for Spoby when Spen's a possibility.