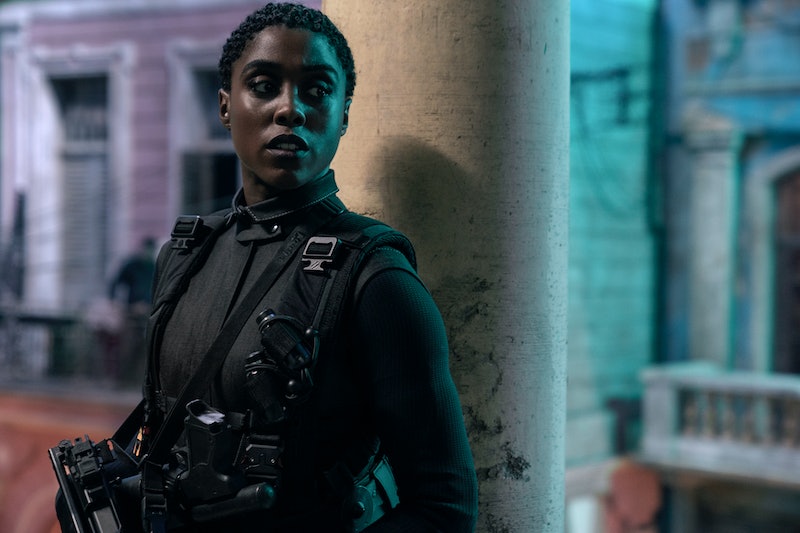 For decades, 007 has been the most iconic codename in spy movie history, and now, it looks like the mantle is being passed from James Bond to a new super spy. On Wednesday, December 4, the first look at the 25th James Bond movie was released, and the trailer for No Time To Die introduces a female 007 for the first time, played by Captain Marvel star Lashana Lynch. And unlike most of the female characters in the Bond franchise, she's not exactly charmed by the legendary spy, played by Daniel Craig.

According to the official synopsis of No Time To Die, Bond decided to leave active service after the events of Spectre and has been living a "tranquil life" in Jamaica. However, when his friend, Felix Leiter (Jeffrey Wright) asks him to help rescue a kidnapped scientist, Bond finds himself facing a new villain, played by a shadowy Rami Malek. Along the way, he teams up with Lynch's Nomi, a new 007 who isn't impressed by Bond, warning him that "the world has moved on" since he's left the service.

"Stay in your lane," Nomi warns in the clip, while the trailer shows her behind the wheel of a fast car, taking down bad guys and going undercover in a slinky gown. "You get in my way, I will put a bullet in your knee — the one that works." Clearly, the 007 title is in good hands with Nomi.

Back in July, The Daily Mail reported that Lynch's character would take over Bond's iconic code number in the upcoming film, but that she would be her own character, rather than a female Bond. "There is a pivotal scene at the start of the film where M says, 'Come in 007,' and in walks Lashana who is black, beautiful, and a woman," a source close to the production told the outlet. "It's a popcorn-dropping moment. Bond is still Bond but he's been replaced as 007 by this stunning woman."

The trailer makes it clear that Nomi has already made an impact on MI6 — even Moneypenny (Naomi Harris) is delighted by her interactions with Bond — and that her introduction is part of the franchise's efforts to bring Bond into the modern era. "It's pretty obvious that there is an evolution in the fact that Lashana is one of the main characters in the film and wears the pants — literally," Ana de Armas, who plays Paloma, told The Hollywood Reporter in November. "I wear the gown. She wears the pants."

Lynch also told the outlet that she was conscious of making Nomi a "real woman," rather than simply a sexy woman for Bond to seduce. "I didn't want someone who was slick. I wanted someone who was rough around the edges and who has a past and a history and has issues with her weight and maybe questions what's going on with her boyfriend," the actor explained, recalling that she sat down with director Cary Joji Fukunaga and screenwriter Phoebe Waller-Bridge to ensure that she "had enough space to explore [Nomi's] humanity as much as I could."

The idea of a "modern" James Bond movie was emphasized by Waller-Bridge, who told the BBC in November that the franchise has made a concerted effort to updated Bond and — more significantly — the Bond women for a 2019 release. "They're having that conversation with themselves the whole time," she said. [My involvement] was much more practical. Just, 'You're a writer, we need some help with these scenes. And you come up with some dialogue for these characters'." Fans can see this new take on the Bond franchise — and meet Lynch's bold new 007 agent — when No Time to Die hits theaters on April 10, 2020.

More like this
Kukulkan From 'Wakanda Forever' Has A Surprising Connection To Marvel History
By Grace Wehniainen
Netflix Shut Down 'Bridgerton' S3 Rumours About A “Very Dark” Storyline
By Bustle
Rupert Grint Just Shared A *Major* Update About Ron Weasley’s Future
By El Hunt
'The Queen’s Gambit' Season 2 Tweet Wasn’t From Anya Taylor-Joy
By Mary Kate McGrath, Jack Irvin and Grace Wehniainen
Get Even More From Bustle — Sign Up For The Newsletter
From hair trends to relationship advice, our daily newsletter has everything you need to sound like a person who’s on TikTok, even if you aren’t.