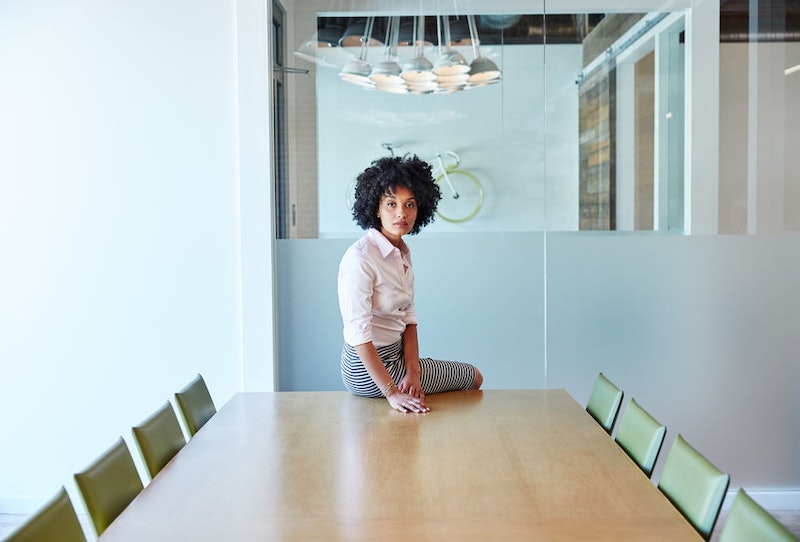 Being an entrepreneur always sounds like the dream job, right? You're your own boss, you get to call the shots, and all that jazz. But it turns out that trying to get your big idea funded as a woman is a lot harder than it seems. A new report by the British Business Bank has found that the number of female entrepreneurs receiving funding in the UK is insanely low.

The organisation, together with Diversity VC and BVCA, examined data from 2017 to see the state of diversity in the venture capital (VC) world. All in all, £5.6 billion was invested during that year in the UK. Rather shockingly, 89 percent of this funding was given to teams comprising all-male founders.

This isn't the only concerning statistic. According to the report, almost half of the VC investment teams (aka the people who make the funding decisions) in the UK have no women. And a measly 13 percent of women that are hired in these teams are in senior positions.

"I was partly surprised and partly not. It's kind of hard to avoid noticing that [the sector is] very male-dominated," Alice Hu Wagner, managing director of strategy, economics, and business development at the British Business Bank tells me. But what was shocking, she says, was quantifying it and seeing just how bad the situation really is.

It doesn't take a genius to see that there is a link between few women being on the decision-making side of things, and few women being awarded funding. It's especially clear when you look at how the VC process works. When an entrepreneur pitches for funding, they are often in the early stages of their business. That means venture capitalists often have little to go on except for the founders themselves.

Is it really that surprising that a bunch of men award money to a bunch of men? No, but this unconscious bias goes deeper. It turns out that less women are even reaching VC stage. "It is shocking that 24 percent of firms did not see a single female founder at investment committee in 2017, and this needs to be urgently addressed," Francesca Warner, the CEO of Diversity VC, stated in the report. "Similarly, just over four percent of founding teams seen by VCs were all-female."

"This is disappointing and demonstrates that we have a long way to go until the industry is a place where anyone from any background can thrive and succeed."

The fact that more men are visible to VCs means that women could be viewed as a "riskier" investment, notes the report. And even when women are given the funding they ask for, they are still less likely to receive further investment later on. Statistics show that, out of all the UK founding teams that were given a first round of funding in 2010-12, 61 percent of all-male teams went on to pass a second round. This figure reduced to 53 percent for any team with at least one woman on it.

Hu Wagner doesn't think the issue has a single cause. "Part of it is, of course, that fewer women are queuing up to ask for it. It's not 50/50 to start with. I do think that female founders or mixed gender teams are facing greater difficulties for a variety of reasons — including unconscious bias — that make it harder for them to secure their money."

The British Business Bank has decided that it's time to make a real change. Although the number of UK VC deals given to all-female founding teams have slightly increased (from seven in 2007 to 39 in 2017), the improvement isn't exactly impressive.

The organisation is therefore proposing steps that all VC firms can take to make the industry more diverse. (This doesn't just include a focus on women, but people of all ethnicities, age groups, and financial backgrounds.) Instead of discussing tokenistic methods like female quotas, it is asking companies to work together by carrying out their own analyses and sharing them along with implementing changes and reporting on their progress.

"It's very important to us that this is owned by the venture capital industry itself, and that they do things like using their imagination to talk to founders that don't look like your stereotypical tech bro start-up guy," Hu Wagner says.

Any short-term impact isn't likely. ("Venture capital runs on a 10 to 15-year cycle at the best of times," notes Hu Wagner.) But recognising the inequality is a step forward nonetheless. The British Business Bank also plans to re-run its research in a couple of years to see if there are any signs of movement.

Most importantly, Hu Wagner doesn't want women or other minority groups to be put off: "Seek out a warm introduction. [It will] get you 13 times more likely to actually secure the funding. That involves putting yourself outside your comfort zone [and networking to find] someone who will vouch for you."

Hu Wagner continues: "The only no that's 100 percent is when you don't put yourself forward, so please do."