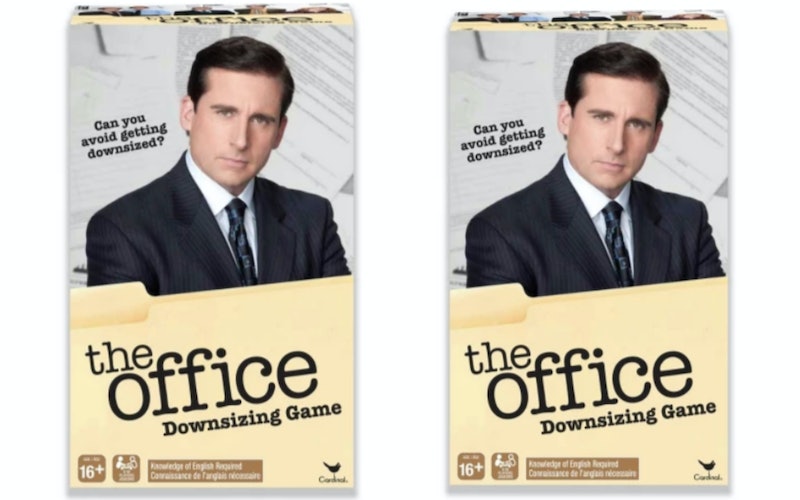 Holy crap — how has this not existed before? If you want to get excited for fall, I can think of no better way than imagining yourself curled up with The Office board game — a thing that actually exists. I don't know why it took me so long to find it, but I'm delighted I finally have. It's called The Office Downsizing Game and it's all about getting to Friday without getting downsized. The best part? You play as your favorite character, so dibs on Assistant to the Regional Manager.

The best part? The game is available at Target for just 15 bucks. Recommended for players aged 16 and over, it's aimed at five to 10 players — and looks like a wild ride.

"It's a game of workplace survival!" the description reads. "Can you make it through the workweek at Dunder Mifflin without getting downsized out the door? Roleplay as your favorite The Office character and try to make it 'til Friday without getting fired. Be part of Team Michael, intent on exposing Toby as the Scranton Strangler. Be part of Team Toby, just itching to issue a pink slip (or two or three). Orrr, BE TOBY in disguise!"

Sounds pretty incredible, right? Toby in disguise!?!? I'm still not sure exactly how the game works — but I see Dundee Cards and Incident Report Cards, which are very exciting indeed — and it seems to be episodic-based fun with new challenges every day of the workweek. "Each day of the week comes with a new email from HR and enough episode-specific gameplay references to separate the avid show watcher from the hard-core Dunder Mifflin devotee," they explain. "Will you triumph in the finger gun face-off? Your job may depend on it."

OK, that's it — I'm sold. In fact, one reviewer seems to have summed up the power of this board game: "I love The Office. I watched this showed like 40 times. This game brought my family together"

IT BROUGHT THEIR FAMILY TOGETHER. Can you really afford not to get it?

Target
The Office Downsizing Board Game

With The Office leaving Netflix, there's no better time to seize an opportunity like this. There's a reason you watch The Office on repeat — it's a soothing balm in these troubled times. But now you can get your hit in an even more interactive way. Many of us mega-fans already drool over every cast reunion photo and obsessively quote the show, so the board game is the next logical step. As long as there's some kind of reference to the dinner party episode, I'll be happy — Michael had too many vasectomies for it to be ignored completely. SNIP! SNAP!

Have you always wanted to experience life at Dunder Mifflin? I know that I have, but I'm not anywhere near Scranton — so this is the next best thing. Chilly nights are coming, so it's the perfect time to get the gang together, grab some apple cider, and try not to kill each other with competitiveness while you play board games. It's what true friendship is all about.