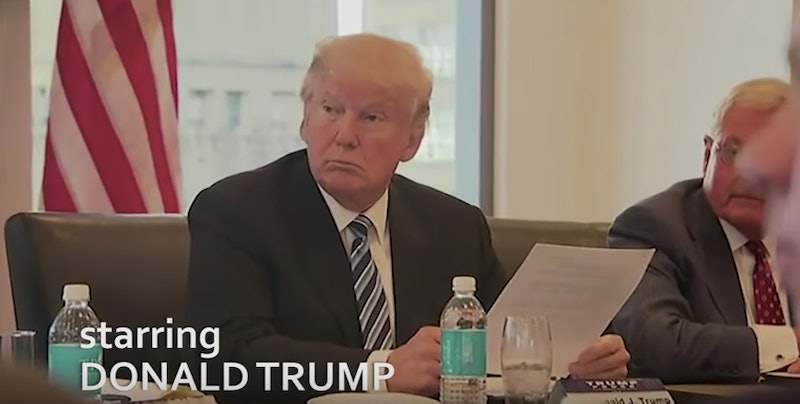 I know that what everybody wants is for their favorite comedic show to be corrupted by being reimagined with life-or-death stakes, right? No? Well just this once, I think you're going to be into it. The Donald Trump-themed parody of The Office is so spot-on that you won't even mind that it appropriates characters you hold dear and replaces them with political figures who are more than a little terrifying. (Or maybe you will, but it's still very funny.) YouTube user Brandon Smith uploaded his take on The Office's opening theme music, replacing footage of characters like Steve Carell's Michael Scott, Rainn Wilson's Dwight Schrute, Jenna Fischer's Pam Beesly, and John Krasinski's Jim Halpert with modern-day political figures.

In the parody, America is the office, and Donald Trump is its new boss — one whom many believe is just as out of touch with his constituents as Michael Scott was with the Scranton branch employees. That's what makes this video so eerily accurate. Vice President Mike Pence is Trump's second in command, which basically makes him Dwight, and holding a sign that says "no whining" just underlines that point. There are also cameos from Speaker of the House Paul Ryan, Secretary of Transportation nominee Elaine Chao, and Attorney General nominee Jeff Sessions, who could really represent anyone in the world of The Office. It's just as dysfunctional as our political landscape right now.

Watch the video below and just try to tell me that it's not life imitating art. Except not quite, because at least there were some people at the Scranton branch who were self-aware enough to know what was up and keep things in the office effectively. I don't have high hopes for Trump's Cabinet doing the same.

Too real, right? With all the connections this parody just pointed out, I might have to take my inspiration for small acts of resistance from Jim Halpert and his pranks. That dude gets it.

Tthe whole video wraps up with that too-perfect moment of Trump flinching away from a live bald eagle that he'd decided to pose with on his desk without thinking through the possible consequences of having a wild animal and bird of prey tethered mere inches from your face. How very Michael Scott of him, honestly.