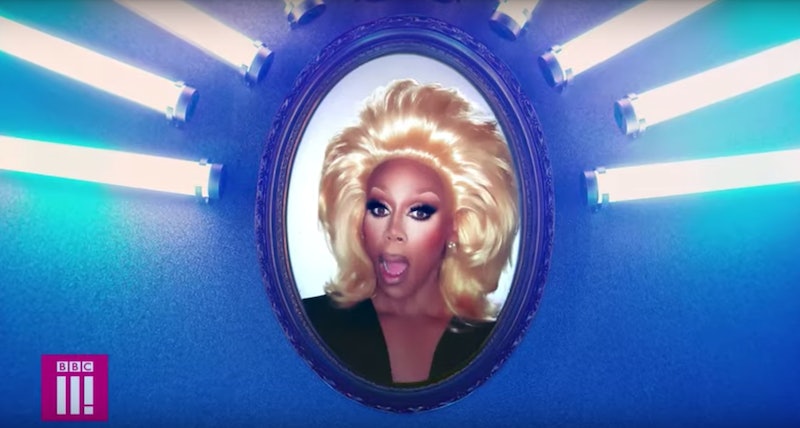 Fans of the reality-competition phenomenon RuPaul's Drag Race have just weeks left before the UK version makes its long-awaited debut, and in the months leading up to the show's arrival, viewers have been kept on their toes with a variety of teasers. However, this week fans have been given the greatest gift so far, because the official RuPaul's Drag Race UK trailer has been released, and it's time for Mother Ru to sashay her way over to this side of the pond.

In the epic trailer, fans are treated to all the fabulousness we've come to expect from the Drag Race franchise, including levitating heels and an actual singing wig. According to Entertainment Weekly, the official full-length trailer is based within a classic British sitcom, and includes a talking portrait of RuPaul who warns viewers to "prepare for the ride of your life," and confirms her upcoming quest to discover "the U.K.’s very first drag race superstar" - all of which occurs as Donna Summer’s "I Feel Love" blares in the background. Amazing.

The first ever lineup of Drag Race UK queens include Baga Chipz, Blu Hydrangea, Cheryl Hole, Crystal, Divina de Campo, Gothy Kendoll, Scaredy Kat, Sum Ting Wong, Vinegar Strokes, and The Vivienne — and as stated in the new trailer, the series will be available to view on Thursday, October 3 at 8 p.m. on the BBC iPlayer.

As reported by Variety, the U.S. version of the hit series enjoyed huge success at the recent Creative Arts Emmy Awards, where RuPaul enjoyed his fourth consecutive win for Outstanding Host of a Reality or Competition Program. The Drag Race host is now tied as the most awarded host in this particular category, and overall the groundbreaking series was nominated for a staggering 14 awards. Speaking shortly after his Emmys victory, RuPaul revealed that he'd love to see the groundbreaking franchise expand all around the globe, and went on to discuss why he loves the show. He added, "I show up to work because I love drag queens, love dramatic people, love being around people who march to a different drummer."

If all the exciting news surrounding the upcoming UK edition wasn't enough, fans also have the 12th season of RuPaul's Drag Race to forward to — which is scheduled to land on U.S. television next year. According to Cosmopolitan, the official start date and competing U.S. queens are yet to be revealed, however, casting for the next series has closed, so filming might already be underway.

In the meantime, Drag Race super-fans get to focus on the first ever UK version, which according to the Metro, recently enjoyed a fabulous premiere event in London. With the exception of Mother Ru, the event was attended by the entire cast of RuPaul's Drag Race UK, including longtime judge, and Strictly Come Dancing star, Michelle Visage, and the show's rotating guest judges, Alan Carr and Graham Norton — all of whom strut their stuff on the pink carpet. Fabulous.