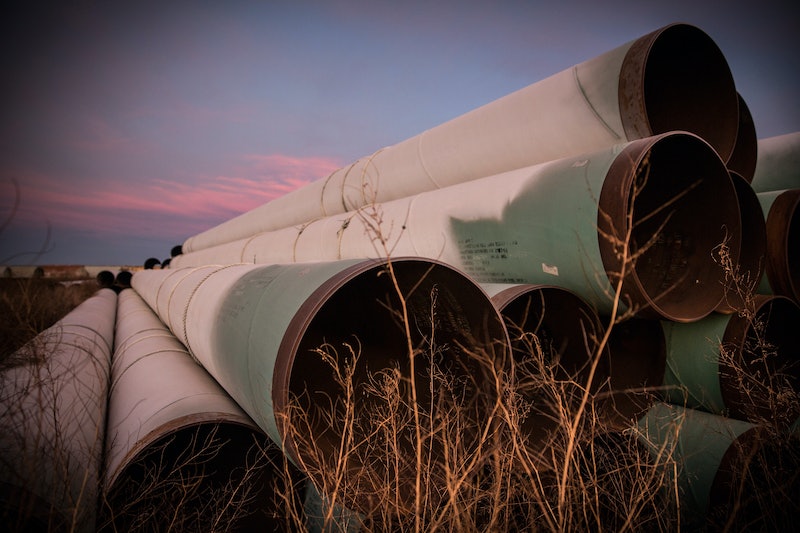 The Keystone XL pipeline, which would transport oil from Alberta, Canada down to the United States through Montana and South Dakota, has sparked controversy for several years. Now, things have reached a breaking point between the South Dakota government and a Native American tribe whose sacred lands the pipeline would cut across. The Oglala Sioux tribe banned South Dakota Gov. Kristi Noem from its tribal lands, according to a letter sent to her office Thursday, until she withdraws her support for two bills she recently signed into law that could end up suppressing protests against the pipeline.

"I am hereby notifying you that you are not welcome to visit our homelands, the Pine Ridge Reservation," Oglala Sioux Tribe President Julian Bear Runner wrote in a letter to Noem's office, "Until you rescind your support for SB 189 and SB 190 and affirm to your state and this country that First Amendment rights to free, political speech are among the truths you hold to be self-evident."

The laws in question grant the state government broad authority to prosecute not only people who show up in person to protest the pipeline, but also groups and outside individuals funding or otherwise supporting those protests, as HuffPost explained. SB 189 in particular gives the state authority to prosecute or sue anyone engaged in "riot boosting," which it defines as essentially any form of involvement — from near or far — in a protest that amounts "to acts of force or violence."

These laws are a “violation of our rights,” according to Oglala tribal member Chase Iron Eyes. Iron Eyes, who serves as a public relations liaison for Bear Runner, tells Bustle that SBs 189 and 190 could discourage people from trying to reform American political and economic institutions, and make it more difficult to maintain “a more respectful relationship with … the natural universe.”

“These bills are designed to quash ‘political dissidence’ or civil resistance,” Iron Eyes says. “What we’re saying is that our systems of law and order should evolve, that modern Americans who are human beings should be able to look around and appreciate that they are connected to what they might consider natural resources, that we are all interdependent.”

He argues that in addition to violating tribal nations’ constitutional rights to free speech, these pieces of legislation also infringe upon their water rights. Criminalizing protests against them, Iron Eyes explains, is indicative of a “political culture that … doesn’t quite have a relationship with the lands and the waters.”

Echoing Iron Eyes’ argument, other critics of these laws say that were instituted to prevent the sort of mass protests surrounding the Dakota Access pipeline that began in North Dakota in 2016 and eventually led to hundreds of arrests, as The Washington Post reported. When she signed the bills into law in March 2019, Noem issued a statement saying, “My pipeline bills make clear that we will not let rioters control our economic development,” per The Washington Post.

Noem's office later issued a response to the letter from the Oglala Sioux tribe, saying that "this announcement from Oglala Sioux tribal leadership is inconsistent with the interactions she has had with members of the community," per KSFY, ABC's affiliate in Sioux Falls. Bustle has reached out to the governor's office for comment.

According to a lawsuit that the ACLU brought against Noem, the state's attorney general, and the Pennington County sheriff, the bills she signed were unconstitutional, because they could have the effect of limiting free speech if people are too scared to protest, as the Argus Leader reported. In responding to the lawsuit, though, the defendants argued that the laws would not have that effect, according to the Argus Leader.

"We have superior legal title to all the land west of the Missouri River that you and/or big oil seek to trespass and aggress on. These are our lands and our waters," Bear Runner wrote in his letter. "If you do not honor this directive — for example, if you were to repeat your recent visit absent permission from our tribal government — we will have no choice but to banish you."