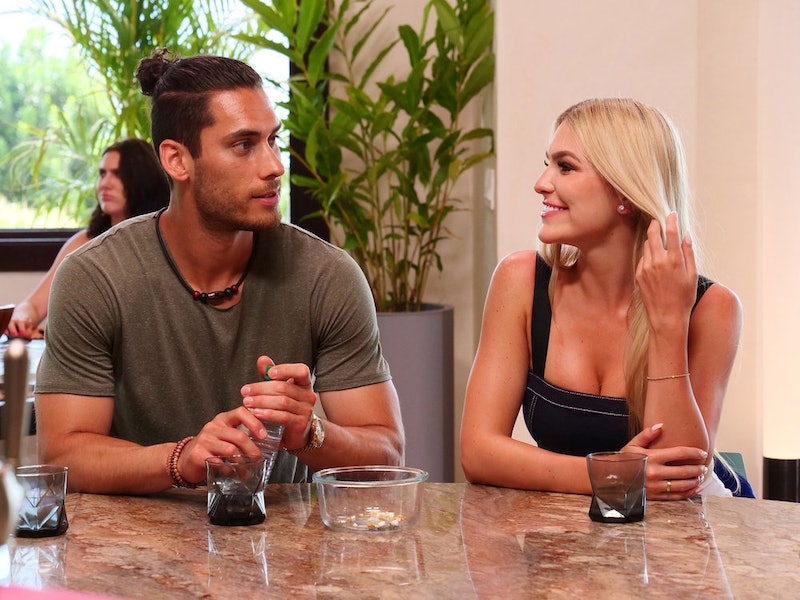 Throughout Temptation Island Season 2, it's begun to seem less and less likely that Kate and David will leave the show together, and more and more likely that David and Toneata will wind up dating. Yes, it was Samantha and Payton who David wound up in bed with, and yes, he clearly still has feelings for Kate. But the morning after his drunken tryst, it was Toneata who he first apologized to. He obviously felt some sense of loyalty to her and wanted to assure her that, despite what happened, he still really likes her. Toneata accepted his apology and wants to keep exploring their connection, so at the moment, they have a lot of potential.

Unfortunately (or maybe fortunately, if you're still rooting for David and Kate), all the clues gleaned from social media suggest he and Toneata aren't long for this world. Though David just joined Instagram two months ago, on Sept. 17, he still only follows four people, and Toneata isn't one of them. Instead, he follows the other three boyfriends from Temptation Island — Rick, Casey, and Gavin — and his (possibly ex) girlfriend Kate. Meanwhile Toneata follows 475 people — David not included.

Now, that David and Toneata don't follow each other on Instagram is a fairly big hint things don't work out between them, but it's possible they're just trying to minimize spoilers by throwing viewers off the scent. Alas, Twitter doesn't help to clarify the situation. David doesn't have an account (he's about as good as self-promo as he is at not cheating on his girlfriend), and Toneata only seems to use hers to promote Temptation Island and post sponsored content.

With all of this in mind, it seems most likely that the two are not together and therefore have no reason to keep in touch now that filming has finished. As Bustle writer Marenah Dobin pointed out, David and Kate just so happened to post photos from Los Angeles around the same time even though they live in New Jersey, which could be a huge flag that they were visiting the city together and have since mended the rift in their relationship.

At this point, David's journey on the show could go a number of ways, but so far all signs suggest he and Kate are able to get past this rough patch.

More like this
Laura Anderson Pulled The Ultimate Girl Power After Her Break-Up
By El Hunt and Megan C. Hills
'Love Island's David Salako Is Determined To Hide His Secret Talent
By El Hunt
Zach Addressed His "Boring Bachelor Energy" After His Group Date With Latto
By Grace Wehniainen
Here's Everyone Who Will Be Competing In 'Survivor' Season 44
By Brad Witter
Get Even More From Bustle — Sign Up For The Newsletter
From hair trends to relationship advice, our daily newsletter has everything you need to sound like a person who’s on TikTok, even if you aren’t.