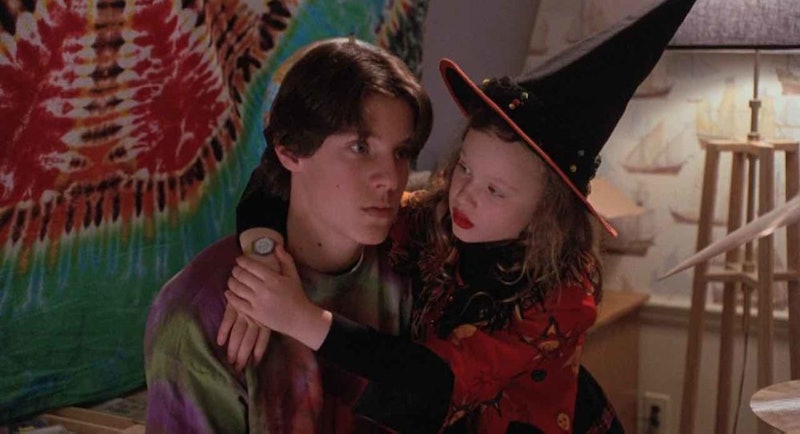 Many of us have heard the term "Christmas in July," but how about Halloween in July? That's exactly what Disney had in mind when it released everyone's favorite nostalgic witch romp Hocus Pocus on July 16, 1993. Now that the movie is celebrating its 25th anniversary, you'd be forgiven if you don't want to wait around until Halloween to pop it back into your VCR (we all still have those, right?). But revisiting Hocus Pocus as an adult brings on an ick-factor that many fans might've forgotten about all these years. The movie actually has an outdated look on teen sexuality, putting a focus on the virginity of a teenage boy and treating his lack of sexual experience as a negative aspect of his personality.

Halloween movies and horror films have a complicated history with the concept of virginity, from the "final girl" trope (which posits that whichever woman resists having sex will ultimately survive the serial killer) to the "virginity loss leads to a brutal death" trope (self-explanatory). And in Hocus Pocus, the 1600s-era Sanderson Sisters (Bette Midler, Kathy Najimy, and Sarah Jessica Parker) can only come back from the dead if a virgin lights the black flame candle on All Hallows Eve. Teenage Max (Omri Katz), a total skeptic, naturally shrugs off the fact that he meets the spell's requirements and brings the Sanderson Sisters back to life with the magical combo of his Zippo lighter and sexual inexperience.

It's played for laughs, but how Hocus Pocus treats Max's virginity is actually a little creepy. First of all, we're talking about a teenager here, so the fact that his virginity is a subject for discussion is a little messed up as-is. But what's worse is that the movie views Max's virginity as something he should be ashamed of. The characters make clear that because he's a teenage guy, Max isn't supposed to be a virgin, and it's an example of toxic masculinity that suggests that a guy isn't a real man until he's had sex.

Because of the criticism he receives for his virginity, Max spends much of the film fielding insults and snarky comments from the people around him; even his 8-year-old sister Dani (Thora Birch) repeatedly digs at him for his sexual inexperience. And when, in one scene, the gang approaches a man dressed as a cop for Halloween thinking he's a real police officer who could help them, the guy scowls at Max and asks if he really is a virgin. When Max sheepishly answers in the affirmative, he's mocked, and it's cringe-worthy to watch a child get made fun of by an adult for this reason.

Because hey: a person's virginity status (especially a teenager's) is no one's business but his or her own, and not something that deserves to be ridiculed. And in any event, teens' sexual activity varies so widely and societal expectations have changed so much over the years that the definition of what virginity even means is up for debate. Even Bette Midler is joking about it:

It's a shame that Hocus Pocus puts such focus on virginity as a source of shame. One has to wonder what kind of virgin Winnie had in mind when she cast her reincarnation spell. In 1693 Puritan society, many men and women were likely virgins before marriage, but there's no denying the societal importance placed on a woman's requirement even then to resist sex. From purity balls, to promise rings, to virginity tests, to slut-shaming, the virginity of young women has been the subject of much scrutiny throughout history.

Did Winnie expect that it was more likely that a virgin woman would light the black flame candle? When Max offers to let his paramour Allison (Vinessa Shaw) light the wick, she bashfully declines, with a slight smirk, suggesting that she might not be a virgin after all — which is totally fine, too. Teens shouldn't be shamed for being virgins, just as they shouldn't be shamed for being sexually active. Max's treatment in the movie is the equivalent of modern slut-shaming for women, and if Hocus Pocus ever does get a sequel, let's hope that any virginity commentary is left on the cutting room floor.

More like this
20 Photos Of The 'Hocus Pocus' Cast Then & Now
By Radhika Menon
After 'Hocus Pocus 2', The Sanderson Sisters Are Coming to Broadway
By Radhika Menon
Lindsay Lohan & Jonathan Bennett Celebrated Mean Girls Day Very Differently
By Jake Viswanath
12 ’90s Movie References You Missed In 'Do Revenge'
By Radhika Menon
Get Even More From Bustle — Sign Up For The Newsletter