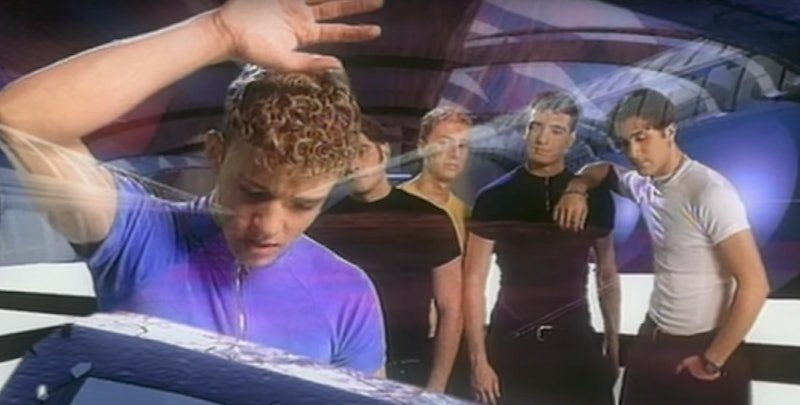 Making it as a boy band can't be easy. First, you need to determine who's who: are you The Cute One? The Bad Boy? The Sensitive Soul? Then you need to learn how to simultaneously sing and dance without being phased by the passionate screams of your devoted fans. And if you were doing all of this in the '90s, you also had to throw on some matching outfits and star in a space-themed video for one of your most popular singles. (See also: Backstreet Boys - "Larger Than Life.") It's the 20th anniversary of *NSYNC's debut self-titled album; and how better to celebrate this milestone than with the deepest of deep cuts? You may call yourself a fan, but chances are good that there's an *NSYNC music video you've never seen or maybe forgot. I'm talking about the original version of "I Want You Back."

Members of the TRL generation are probably more familiar with the second take for the song, which was the band's first ever wide-release single. It's more of a traditional get-to-know-your-heartthrobs clip, in that, between dance scenes, fans get to see Justin, JC, Lance, Chris, and Joey hanging out and participating in #relatable activities like playing ball, shooting pool, and riding jet skis. They were obviously going for the approachability factor here, even though Justin wears a gold hoop earring the size of a quarter and that aluminum foil backdrop is super distracting.

Are the young woman's scenes in black and white because they're all collectively sad about her? Who was even supposed to have wanted her back? Because honestly, the guys looks like they're perfectly happy having Friend Time together.

Anyway, as narratively poor as this video is, it's a vast improvement on the original. But where the original fails in plot, it succeeds in tight, cap-sleeved man shirts; brooding stares into the camera; and special effects that would make Ed Wood lower his head in shame. Why are these five young men on a space station alone, dancing about lost love? Who's the pixelated young lady who just can't get through to them? Is this an Atari game I'm looking at? Why are they wearing so many layers? I am crazy about it.

As an, ahem, more than casual fan of the supreme boy band of the '90s, I've known about the existence of this video since I brought their documentary 'N The Mix home from the mall in 1999. This classic documentary/concert/music video odyssey featured a quick rundown of the boys and their interests, plus a truncated, fan-friendly version of how they got together and got on the road to being pop superstars. That journey included this low-budget first attempt at crafting a visual language for their debut single for its pre-USA European release. You may have noticed that this video features the same choreography as the later one. While their video treatments weren't always winners, *NSYNC never came to play with their choreo. They got it in one on "I Want You Back."

*NSYNC would go on to star in many installments of MTV's Making The Video and show off their increased budgets with ostentatious clips like "Bye, Bye, Bye" (dogs, cars, trains), "Pop" (candy-covered rave), and "Girlfriend (Remix)" (arguably anticipated the Fast & The Furious franchise). But as I reflect on 20 years of loving my number one boy band — and I'm still hanging on for a real reunion, denials be damned — I'm nurturing my soft spot for their humble beginnings, like this terrifically wonky music video.