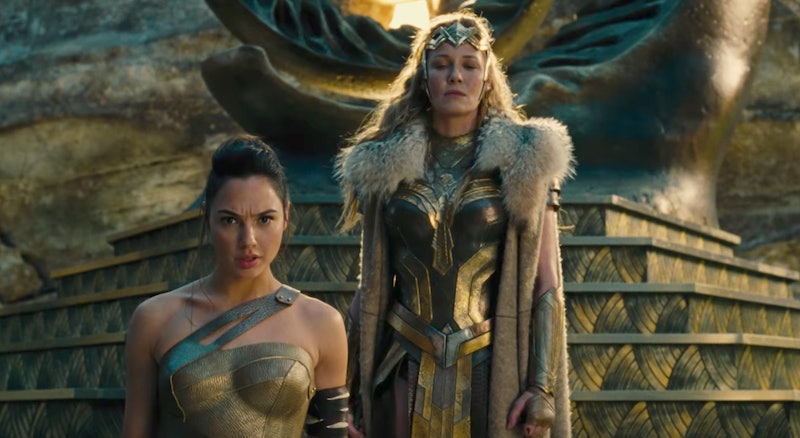 Men: you can't live with them, can't live without 'em. Unless, of course, you're Wonder Woman. For most of her life, growing up on the island of Themyscira, Diana lived her life free from men, and that's how some women would prefer to experience the new Wonder Woman film. Women-only screenings of Wonder Woman, spearheaded by the Alamo Drafthouse in Austin, Texas, sold out in minutes, only to be hit with a huge backlash from some men who felt excluded. Yet it seems the film was actually prepared for such backlash, even if it couldn't have predicted the all-female screenings or not, judging from one Wonder Woman line in the movie: "Be careful in the world of men, Diana, they do not deserve you."

This warning is issued by Queen Hippolyta right before Diana leaves Themyscira with Steve to fight in WWI. Wonder Woman sees protecting mankind as her sacred duty, but Hippolyta knows that the nature of men is fickle. And her statement — "They do not deserve you" — rings especially true as the uproar from men continues in the face of women-only screenings. Men on Twitter have called the screenings misandrist, and one particularly loud alt-right troll, Jack Posobiec, has even pledged to file a complaint with the New York City Human Rights Commission regarding three all-female screenings planned in Brooklyn, according to Mashable.

Make no mistake, no matter how Posobiec spins it, these men crying gender discrimination are not advocating for equality of the sexes. They are overreacting to the idea that women might want to exclude them for just two hours of one day. Quite literally, these kinds of men do not deserve Wonder Woman.

A majority of the men objecting to the all-female screenings of Wonder Woman appear to be willfully ignorant of their male privilege. They mistake a woman's desire to enjoy a film in peace with an unprovoked attack on the male gender — safety is twisted into sexism. If this is how men are going to react to a handful of all-female screenings of a movie, imagine how they would react to an actual Wonder Woman coming into the world to set them straight? I'm willing to bet that, just like some of the men in Wonder Woman, they would doubt her ability, belittle her on and off the battlefield, and treat her with only a fraction of the respect she deserves.

What these men fail to recognize is that their gender is in a constant state of being celebrated by pop culture. Women, however, are not. And the fact that women crave safe spaces to enjoy the only current female superhero movie should act as a signal to men that things are far from equal. Women don't want to walk out of a rare blockbuster celebrating a female heroine and have it ruined by men complaining Gal Gadot wasn't physically "right" to play Wonder Woman, or wishing that Batman or Superman would show up instead. The fact that women need all-female screenings of Wonder Woman to ensure a pleasurable movie-going experience is devastating, but this is the reality we live in. If that's what women have to do to honor each other's power for once, than so be it.