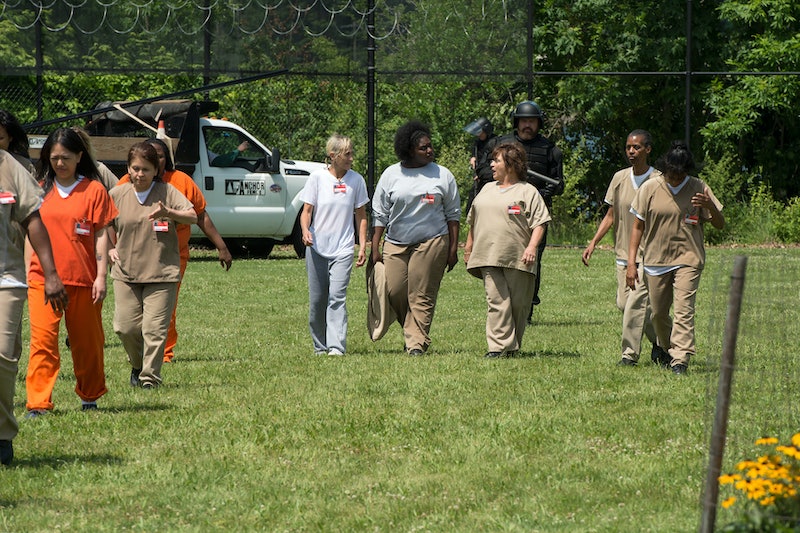 Have you recovered emotionally from Season 4 of Orange is the New Black? Me neither, but I'm still clamoring to see what happens next and Season 5 can't hit Netflix soon enough. After Poussey's death in the penultimate episode, Taystee incited a riot to close out the season — and, in case that wasn't a big enough cliffhanger for you, Dayanara pulled a gun on two guards before the screen faded to black. Viewers were left wondering, "what the heck happens now?" and we'll finally find out when the series returns. Netflix has announced the Orange is the New Black Season 5 premiere date and we have a few more months to recover and mentally prepare ourselves for what will definitely be an emotional roller coaster of a season.

All 13 episodes of Orange is the New Black Season 5 will begin streaming on June 9, so clear your weekend schedule and get ready for an intense marathon. Although the cast has remained tight-lipped about what's in store, Danielle Brooks, who plays Taystee, provided Brad Goreski with some intriguing information on the red carpet at the Screen Actors Guild Awards on Jan. 29. The actor revealed that Season 5 will take place over the course of just three days, which is a significant departure from the structure of the first four seasons. But, the brief teaser released by Netflix doesn't exactly provide viewers with any clues about what will happen in those three days.

In the same interview, Brooks described Season 5 as "intense" and advised viewers to make sure they're armed with popcorn and tissues. (Noted.) It's unclear whether these three days take place immediately after the Season 4 finale, or if there will be a time jump — but surely that cliffhanger will be addressed immediately. (Right? I mean, dedicated fans have waited nearly a year to learn the fates of our favorite characters.)

Backstage after the cast's big win at the Screen Actors Guild Awards, Taylor Schilling told E!'s Zuri Hall that the new timeline structure makes the stakes higher than they have been in a while "just by virtue of the compressed time and seeing people in compressed circumstance."

Although hints and spoilers are in short supply, it sounds like Season 5 may be the most intense installment of Orange is the New Black yet — and that's really saying something.