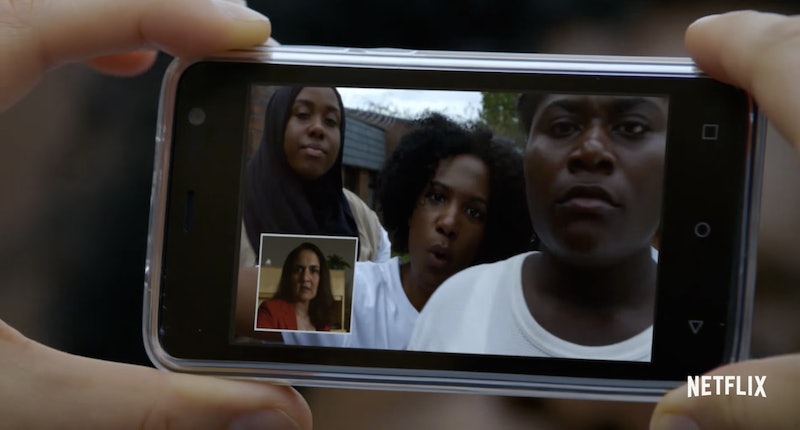 Litchfield is up in flames. For real this time. The Orange Is the New Black Season 5 trailer released on Wednesday previews major tensions for the upcoming season, premiering June 9. The women are mad as hell, as they should be. Season 4 left off with a major cliffhanger, with Daya pointing a gun at a guard while her fellow prison mates rallied and cheered her on to shoot him. Tensions were already high when last season came to a close, after Poussey was accidentally suffocated and killed by a guard in what started as a peaceful demonstration. Issues on the show have grown so far beyond Piper's Season 1 adjustment to prison. This is war.

Although the new trailer shows many of the women angry, devastated, and hopeless over what happened with Poussey, it also shows them coming together and perhaps the most united they've ever been. "If we wanna leave this place right, we have to speak as one united room," says Maria. Confronting Caputo, Taystee says, "You did our girl wrong, and we want justice."

The women, from different groups and all walks of life, join forces to rebel against Litchfield and the inhumane treatment of inmates. It gets bigger than Caputo, even getting the attention of news organizations.

What happened with Poussey, a fan favorite, was devastating. Clearly, the women of Litchfield are not only living in pain, but in fear. If there's one good outcome of the tragedy to be found, it was the ability to bring all of the women, who were previously divided, together to fight for more justice than they've been shown so far. Bring on Season 5.

More like this
Season 2 Of 'Yellowjackets' Is Coming Sooner Than You'd Think
By Gretchen Smail and Grace Wehniainen
The ‘Emily In Paris’ Season 3 Trailer Teases Major Career & Love Crossroads For Emily
By Bustle Staff
The 'Ginny & Georgia' Season 2 Release Date Is Only A Few Weeks Away
By Martha Sorren
These 'Law & Order: SVU' Throwback Pics Show 23 Years Of Shipping History
By Grace Wehniainen
Get Even More From Bustle — Sign Up For The Newsletter