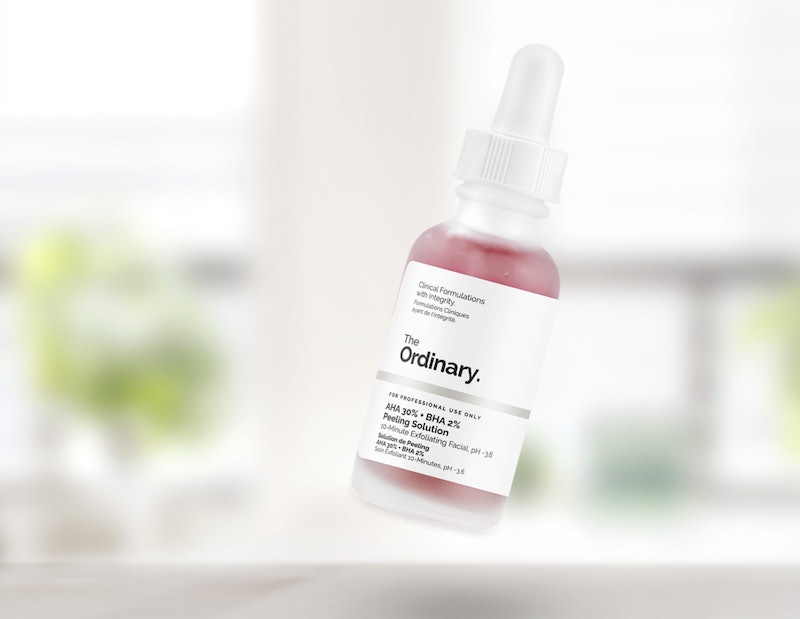 We toss around the phrase "broke the internet" with some might say "reckless abandon," but back in September, Deciem's The Ordinary quite honestly broke the internet — or at least Reddit — with their line of uber-affordable serums. The brand stands apart for their ethos of sinking money into research and nixing the markup, and while they shook up the industry with their debut, roll-outs have been on the slower side. Making up for it? The Ordinary's new range of exfoliators, a group of highly intriguing, acid-based products released on Friday.

Quick refresher: Acids have come super far from their Two-Face villain history, with refined formulas and variants ranging from plumping hyaluronic, to resurfacing alpha hydroxy (AHA), to clearing beta hydroxy (BHA) acids. A.k.a., clear skin in record time — they're the kickers behind most cult fave skin products, from Sunday Riley's Good Genes, to Paula's Choice Skin Perfecting 2% BHA Liquid Exfoliant, to Biologique Recherche's Lotion P50. Bang for your buck, but you've usually gotta pay a lot of bucks. Not so with The Ordinary's new line, typical of their angel ways. None are over $10. À la acids themselves, let that sink in.

Not to say The Ordinary didn't have exfoliators before, because their Lactic Acid formulations and Retinol were (are) beloved.

But in the wide world of acids, something different works best for everyone — although at these prices, it's tempting to slather your face with all of them. I mean, I won't. Don't do that, that'd be bad. How to choose? If you want a soothing, exfoliating AHA toner à la Pixi's Glow Tonic, Glycolic Acid 7% Toning Solution is the move. Props for the fun squirt bottle.

BHA salicylic acid is a master exfoliator often recognized for its puberty hero status, but it holds up. Combined with soothing witch hazel, it helps exfoliate the inside walls of pores, according to the brand, which increases skin clarity.

The big kahuna. The one I'm most personally excited for, this is The Ordinary's take on all those "instant facials" going around. Similar to Drunk Elephant's raved-about T.L.C. Sukari Babyfacial, which relies on 25% AHA and 2% BHA for instantly radiant skin (and delivers), The Ordinary's version contains 27% AHA.