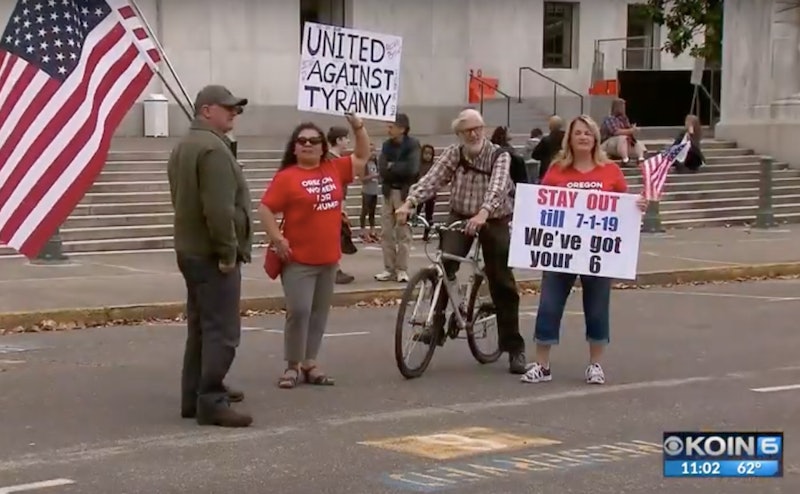 As a legislative showdown in Oregon over a cap-and-trade bill aimed at lowering greenhouse gases wears on, the state's GOP appears to have opted for an odd social media strategy. According to a Rolling Stone writer's image search, the Oregon GOP tweeted a photo of an "armed militia" that actually showed a different, peaceful protest. As of Sunday afternoon, the Oregon GOP's Tweet remains published and uncorrected.

But shortly after the tweet was sent, some on Twitter noticed something odd about the photo in question: It didn't feature any militia, armed or otherwise.

"I did an image search," Rolling Stone senior writer Tim Dickinson tweeted on Sunday. "The picture isn't of a militia storming the capital over the weekend. It's a of a normal protest from a few days ago largely composed of truckers/loggers."

Dickinson included a screenshot from a separate local Fox article dated to Wednesday last week. According to the article, the people in the photo were primarily loggers and truckers who gathered to protest HB 2020, which according to the local Fox affiliate, would put caps on the state's greenhouse emissions. Bustle has reached out to Oregon's GOP for comment.

The Oregon GOP tweet appeared to reference threats of a militia presence at the state's capitol. The Wall Street Journal reports that the building was closed on Saturday because of such concerns.

“The State Police Superintendent just informed the Senate president of a credible threat from militia groups coming to the Capitol tomorrow,” said a text message sent to senators at the end of last week, per the Journal. “The Superintendent strongly recommends that no one come to the Capitol.”

It remains unclear exactly what those threats specifically entailed.

Although the Oregon GOP did not correct its tweet depicting the peaceful, separate protest, the account did continue to tweet about the ongoing protests more generally.

The tweet, the image, and the associated protest are all part of a strange and ongoing political conflict in Oregon. Oregon's GOP senators have left the state as part of an effort to block HB 2020, according to The Daily Beast. (The publication also notes that politically-oriented walkouts have become relatively common in the northwestern state's legislature, including on walkout as recent as May.)

In another unusual turn of events, KGW8 further reports that state police are authorized to "force any senators they track down in Oregon into a patrol car to return them to the Capitol," although the group told the news outlet that that's not their first choice of action. Meanwhile, the state's Senate president has threatened to fine the missing senators $500 a day during their absences, also per KGW8.

A GoFundMe has been established to cover any such fines that the protesting senators might incur as part of their walkout. As of Sunday afternoon, it had raised over $40,000. "We know they still have challenges ahead of them and hopefully this will ease their minds a bit," the fundraiser's organizer wrote in an update to the campaign on Sunday.