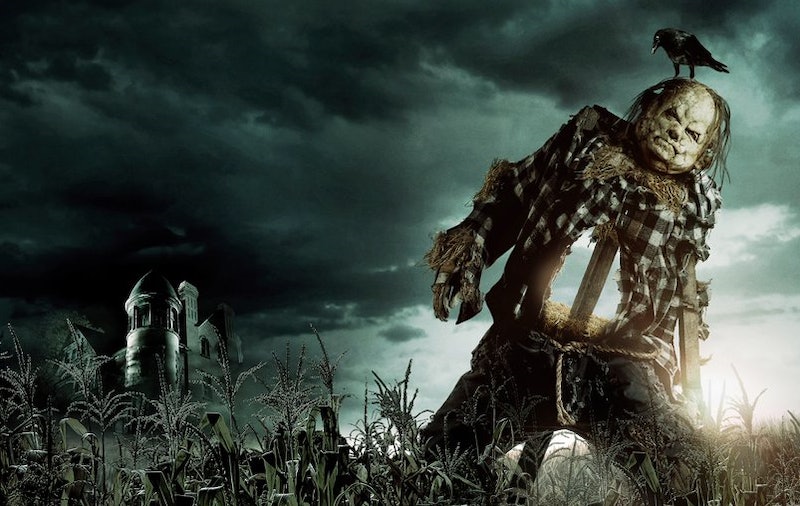 In 1812, two German brothers, the Brothers Grimm, wrote down and published a bunch of folk tales that were allegedly for children but were incredibly gruesome: wolves devoured grandmothers, step-sisters mutilated their own feet, and little children were cooked up by witches in gingerbread houses. Fast forward a few hundred years, and Alvin Schwartz did the same thing in Scary Stories to Tell in the Dark.

The Brothers Grimm always believed that scary stories were appropriate for children. In the forward to their second volume of stories, Wilhelm Grimm argues that freaky stories are as natural to humanity as flowers are to the wilderness. If you don't like flowers that's fine, but you can't argue them out of existence: "Who cannot enjoy their benefit, may pass them by, but he cannot ask that they be given a different color or shape."

I sure which I'd been as eloquent when I had to explain to my mom that I wanted to keep checking Alvin Schwartz's Scary Stories to Tell in the Dark out of the elementary school library, even though it was giving me constant, waking nightmares about toe demons. It should surprise no one that Scary Stories was one of the most frequently banned books of the '90s, that parents hated the grisly imagery and the lack of clear morals, and that kids couldn't get enough of it.

Like the Brothers Grimm before him, Alvin Schwartz was a folklorist. His Scary Stories series is mostly a straightforward re-telling of American folktales and urban legends, with mind-melting illustrations by Stephen Gammell. And these short, often simple, creepy tales have inspired a Scary Stories documentary, full length books, adult meditations on feminism, and a new feature film.

Schwartz was also, by all accounts, perfectly happy with his status as a widely feared and banned children's author. He trusted that children were sophisticated enough to handle horror. He also trusted that children and their grown-ups would tell and re-tell and change the stories for themselves. The stories of Scary Stories to Tell in the Dark are deceptively simple, you see — Schwartz spent years doing extensive research on folklore and the horror genre, then stripped his tales down to their bare essentials, knowing that, in the grand tradition of storytelling, the storytellers would probably add their own embellishments.

They are, after all, scary stories to tell, and not just to read. Schwartz carefully designed his stories to be read out loud, using his bathroom for practice since it had the best acoustics in the house.

But where did he find the stories themselves? And what makes them so freaking scary that I'm honestly still a little afraid of dreaming about that lady from "The Dream"?

The short answer is... all over. Part of Schwartz's genius is that he could take a mixed up pile of Victorian children's stories, Native American mythology, ancient fables, modern urban legends, and bits and pieces of oral tradition, and turn it all into one cohesive, spine-tingling collection.

Some stories are adapted from traditional American folktales, their origins lost to time. The bizarrely titled "Me Tie Dough-ty Walker," in which a severed head speaks gibberish to a dog, is apparently a classic American ghost story, as is "The Big Toe." The story "Clinkity-Clink," about a dead woman coming back for her stolen coins, is an African American folktale first collected in the book Nights with Uncle Remus (yes, the same Uncle Remus from that movie that Disney pretends they didn't make).

Schwartz understood that folktales need not be unspeakably ancient or mysterious to be retold, though.

Other stories come from far older mythologies: "The Wendigo" is a cannibalistic creature from Algonquin myth, and two of Schwartz's stories feature creepy black dogs, a death omen in British folklore. "The Appointment" is a story about a date with death that originated in Ancient Babylon.

There are even a few "folkloric" stories that don't exactly fit the folklore model. "The Drum" is about two irritating little girls who behave so poorly that their mother decides to bounce and leave them with a new mother, who has shiny, glass eyes and a heavy, wooden tail. This story is a retelling of "The New Mother" by Victorian author Lucy Clifford (it also, incidentally, inspired the supremely creepy Coraline by Neil Gaiman). "The New Mother" was an original story by Clifford, but it tapped into such a primal, psychological fear of abandonment that it sure felt like a fairy tale that had always been there.

Similarly, "The Dream" and "Like Cat's Eyes" and several other stories come from the autobiography of Augustus Hare, an English raconteur known for stretching the truth. His memoirs are mostly about all the cool hangs he supposedly had with various ghosts.

Schwartz understood that folktales need not be unspeakably ancient or mysterious to be retold, though. Any story that enters the public consciousness quickly becomes folklore, belonging more and more to the people who retell and embellish it than to the author who first began it (and one day, all of the millennials will sit J.K. Rowling down in a room and try to gently explain this concept to her).

Altogether, Schwartz managed to marry the old school terror of classic ghost stories with the all-too-real terror that comes with living in the modern world.

Some of the most viscerally horrifying of Schwartz's stories are actually urban legends, a modern genre of folklore that is spread primarily through internet forums, chain emails, and alleged "it happened to a friend of a friend" retellings. "High Beams" is one of these, in which a killer crouches in the backseat of a young woman's car. "The Babysitter" and "The Hook" are urban legends too, as well as "Oh, Susannah!," "Alligators," and "The Red Spot."

Altogether, Schwartz managed to marry the old school terror of classic ghost stories with the all-too-real terror that comes with living in the modern world. The stories of Scary Stories are so nightmare-inducing because those fears are already with us, lodged in our collective human consciousness. They spring up naturally from human society like Wilhelm's creepy, stomach-churning flowers. They've been here for years, evolving slightly with each retelling, but always lurking at the back of your mind.

And just when you think you're all grown up, that you're no longer afraid of living scarecrows or wolf girls or mirrors in the dark... that's when they strike, and you find yourself cowering under the covers, hiding from a toe demon all over again.