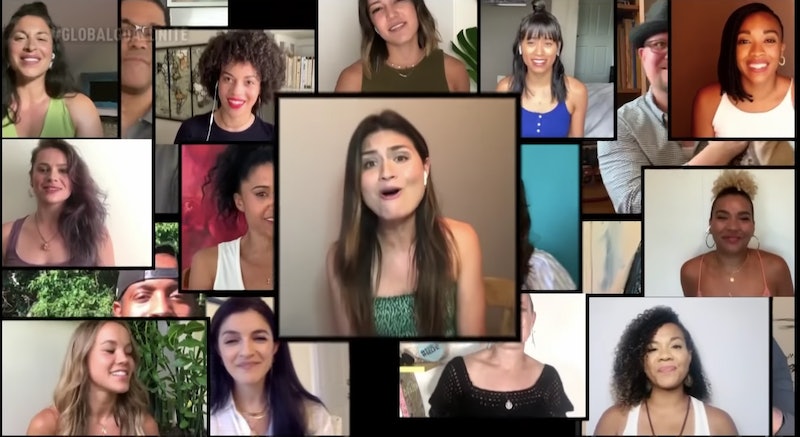 During the Global Citizen's "Global Goal: Unite For Our Future" livestream, the original cast of Hamilton reunited to perform "Helpless", a number from the hit musical. Members of the original cast staged the virtual performance with a little help from Jimmy Fallon and The Roots. Meanwhile, the performance marked the second time that Phillipa Soo has reprised her role as Eliza Hamilton since exiting the musical in 2016, as per Rolling Stone. Creator and star Lin-Manuel Miranda also joined the reunion for his rap section, alongside original cast members Renee Elise Goldsberry, Leslie Odom Jr., Daveed Diggs, and more.

Global Citizen hosted the concert as part of an ongoing effort to tackle global injustices, including ensuring the world's most vulnerable are protected against COVID-19, as per the organizations website. The performance, which was introduced by Fallon, brought together the various stars virtually due to the ongoing pandemic. The Tonight Show host noted that Hamilton is a story about, "hope, revolution, and love" and that it is, "as relevant now as it was back then."

Hamilton's original stars have treated fans to several reunion performances over the past couple of months. In April, John Krasinski surprised a 9-year old Hamilton fan on Some Good News, inviting her to a virtual performance of "Alexander Hamilton" with the original cast. Miranda hopped on the Zoom call to surprise the young super fan, and was joined by Diggs, Okieriete Onaodowan, Soo, Christopher Jackson, Jasmine Cephas Jones, Goldsberry, Jonathan Groff, and Javier Muñoz.

For anyone watching the Hamilton original cast reunion who feels sad they never scored tickets to the Broadway musical, there's more good news. In May, Disney+ moved up the release date for a recorded performance of Hamilton, bringing the hit musical to the streaming platform on July 3. Disney planned a theatrical release of Hamilton for Oct. 15, 2021, but moved the date up after postponing the premiere of Miranda's In The Heights film.

It's been a major couple of months for Hamilton cast members and fans alike, and for anyone who can't get enough of the popular musical, a full performance will be available to stream on Disney+ soon.

More like this
Drake’s Surprise Performance With The Backstreet Boys Was Fans’ Fire
By Stephanie Topacio Long
You Might Want To Rewatch 'Elvis' For This Britney Spears Easter Egg
By Grace Wehniainen
The Tragic Reason Elvis Never Toured The UK
By Sam Ramsden
Photos Of The 'Elvis' Cast vs. Their IRL Counterparts Will Have You All Shook Up
By Grace Wehniainen
Get Even More From Bustle — Sign Up For The Newsletter