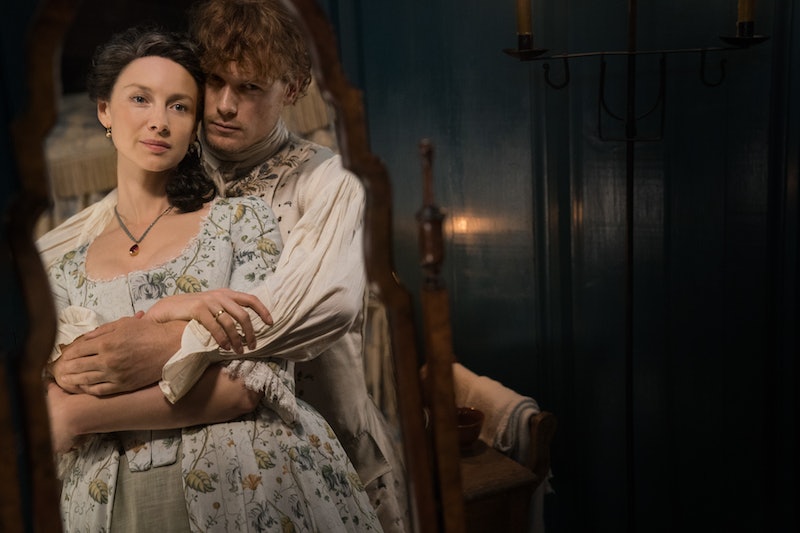 Life for Jamie and Claire has never been easy, but will all of that change now that they've found themselves in America? If the Outlander Season 4 trailer is any indication, the answer to that question is a loud and resounding no. In fact, this whole new world will introduce them to a whole new set of challenges as they try to make a life for themselves in the Colonies.

The end of Season 3 concluded on yet another big cliffhanger when Jamie and Claire found themselves shipwrecked in Georgia after a nasty storm destroyed their ship. (Thankfully, both of them were able to survive and make it out of the crash relatively unscathed.) Judging by the trailer, Season 4 — which is based on Diana Gabaldon’s fourth book Drums of Autumn — will look to pick up right where the third installment left off, as the recently reunited duo struggle to find their footing in unfamiliar territory.

Speaking of things that are unfamiliar, the teaser also provides a few brief glimpses of new characters joining the cast. Among them is Jamie's Aunt Jocasta, played by Orphan Black's Maria Doyle Kennedy, who owns a plantation where it seems Jamie and Claire end up staying, at least momentarily. Then there's also the introduction of Stephen Bonnet to look forward to as well. Played by Downton Abbey's Ed Speleers, Stephen is a pirate and smuggler who book readers know will play an important role in Brianna and Roger's story down the line.

Of course, in true Outlander fashion, the fourth season will also include a few of the necessary plot points we've come to expect from the series each year. Jamie is shown getting punched or beaten up in some way or another; Claire is tackling danger head-on like the boss that she is; and the chemistry between Sam Heughan and Caitriona Balfe is just as prominent as ever, so fans can expect to find a few steamy love scenes to be sprinkled around throughout the season.

Unfortunately, both Brianna and Roger are MIA throughout the trailer, but never fear, for they too will be back in Season 4 when the show returns in November. In fact, Entertainment Weekly was able to confirm the return of Sophie Skelton (Brianna) and Richard Rankin (Roger) during a set visit late last year. So don't worry — they will have their own fair set of adventures throughout the fourth season.

It's also worth noting that the teaser additionally introduces a new mystery when Claire discovers a skeleton head that raises a few very important questions for the duo. "It's a silver filling. Something that won't be invented for another hundred years," Claire reveals to Jamie. How can this be and what does it all mean? That's something Outlander fans will just have to wait and find out for themselves when Season 4 kicks off later this year.

From the look of things, life in the world of Outlander isn't about to get any easier, but whatever obstacles Jamie and Claire may have to overcome, at least they'll be together.