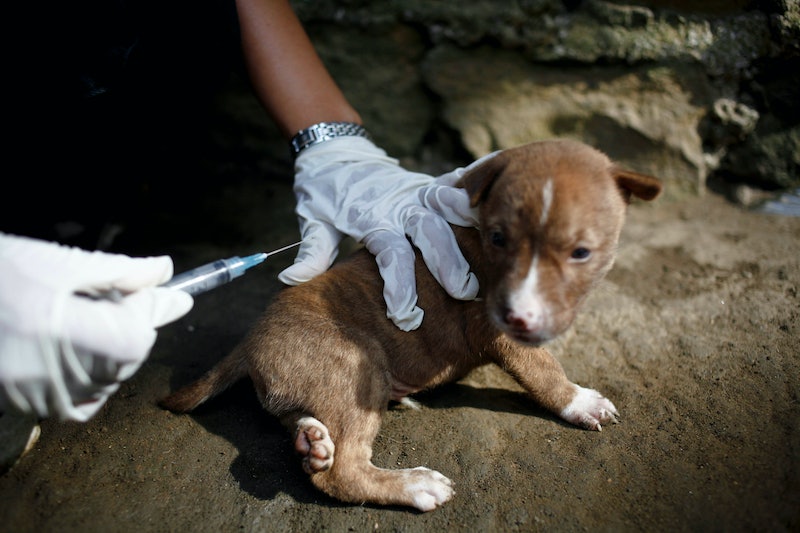 A new bill is making its way through Congress that could help stop animal suffering at the hands of humans. The PACT Act could make animal cruelty a felony in every state — and its bipartisan support means it has a good chance of becoming federal law.

The Preventing Animal Cruelty and Torture (PACT) Act would make animal cruelty a federal crime, allowing federal officials to pursue cruelty cases that take place across state lines, CNN reported. Moreover, PEOPLE reported that, while all 50 states have anti-cruelty laws, it's sometimes hard to determine in which state a cruelty crime occurred, making state officials reluctant to prosecute a case. The PACT Act would help address this loophole.

Currently, federal law prohibits animal fighting and animal cruelty if the acts of cruelty are videotaped and distributed, CNN noted. As Cole Higgins of CNN described, the PACT Act would add to these restrictions and prosecute people for the following actions: "crushing, burning, drowning, suffocating, and impaling animals and sexually exploiting them."

The PACT Act has previously passed the Senate twice, but has never passed the House of Representatives, PEOPLE reported. However, the outlet noted that Sara Amundson, the president of the Humane Society Legislative Fund, said advocates are confident that the PACT Act will pass both chambers this time around, as a House committee chair who previously held up the legislation has now retired.

Amundson also stressed that the bill seems to have a lot of momentum because of its bipartisan appeal. "We have highly motivated bill sponsors who anticipate early movement due to its strong bipartisan support," she told PEOPLE. The PACT Act is sponsored by two representatives from Florida, Ted Deutch, a Democrat from West Boca, and Vern Buchanan, a Republican from Sarasota, PEOPLE noted.

An article on the Human Society Legislative Fund's website included a quote from Deutch explaining why he believes passing the PACT Act is imperative. As the congressman described:

This is commonsense, bipartisan legislation to bring some compassion to our animal laws. For many Americans, animal welfare is an important policy issue, and the idea of animal abuse is abhorrent. By building on state and local laws, Congress should act to guarantee a level of protection for animals across the country by criminalizing these inhumane acts ...

The Human Society Legislative Fund also reported that Congressman Buchanan considers the issue a top priority. "The torture of innocent animals is abhorrent and should be punished to the fullest extent of the law," Buchanan said via the organization's article. "Protecting animals from cruelty is a top priority for me and I look forward to working with Congressman Deutch on this important issue."

If the PACT Act becomes law, those convicted under it could face up to seven years in prison, along with fines, CNN reported. The outlet also noted that, in addition to having bipartisan congressional support and the backing of animal welfare advocates, the PACT Act has also been endorsed by the National Sheriffs Association and the Fraternal Order of Police. PEOPLE revealed that the legislation has already been introduced in the House of Representatives and will soon be introduced in the Senate.