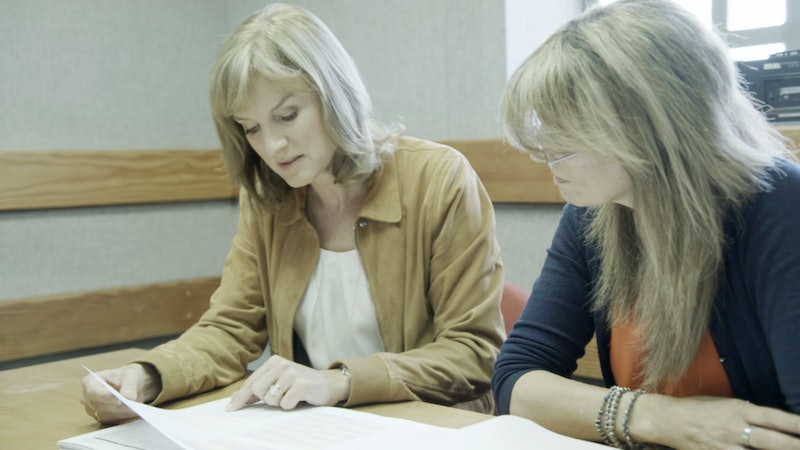 Lots of people choose to live out their biggest fears in order to overcome them. Scared of clowns? Head down the circus. Scared of swimming? Jump into the sea. Scared of heights? Jump out of a plane — one second, what? OK, you lost me there. But ITV's The Parachute Murder Plot is totally chilling and literally everyone's worst nightmare come true. The documentary delves deeper into the story and tells the story of this case, which is actually too horrific to even imagine, let alone believe actually happened. You may want to give it a miss if you're planning a skydive any time soon.

It tells the story of a husband who wanted to leave his wife for another woman, but instead of simply separating, he sought to end things for good — which in his mind meant murder. Murder made to look like an accidental death and a life insurance claim to sweeten the deal.

Journalist and all round icon Fiona Bruce presents the documentary which aims to go beyond the media headlines and the chaos to look at the intricacies of a case that shocked the nation and the world. The true horror and calculation involved in this case is shocking.

As if the thought of jumping out of a plane isn't scary enough, this case is basically fuel to every single fear people (especially those prone to anxiety like moi) have re skydiving or any kind extreme sport/activity. Swimming in a cage with sharks? Nope. Bungee jumping? Nope. Cave diving? Nope nope nopedy nope, I will stay a chicken thanks. Skydiving, though, is very highly regulated and as safe as can be, usually anyway. So what went so wrong with this particular skydive that nearly ended in a woman losing her life? Well, sadly someone with the relevant expertise used their knowledge for subterfuge.

Victoria Cilliers had been married to her husband Emile for four years. They had two small children together and from the outside, Emile seemed to be the ideal husband. As The Guardian put it, "Emile Cilliers appeared to have it all. He was a successful soldier, an excellent athlete, good company and seemed a decent family man".

However, Emile was accused and charged with not one but two murder attempts within a week. The first attempt was an engineered gas leak, which he hoped would cause an explosion while his wife and children were asleep in their home. That night he claimed he was staying overnight at the barracks. In actual fact he was staying with his ex-wife, who he was having an affair with, while also contacting his new girlfriend and sex workers. Luckily the family weren't harmed in his first attempt. However, the second attempt was far more effective, but luckily still did not kill his wife.

On Easter weekend 2015, he and his wife had decided to go skydiving, an activity they were both hugely enamoured in and in fact experienced with. Victoria, an army physiotherapist is a very experienced and highly qualified parachutist. She is in fact a qualified free-fall instructor, having completed 2600 jumps, and all of those jumps were completely fine. So what led to her plummeting 4000 feet to almost certain death? Well, the horrifying fact is her husband tampered with her parachute.

In this documentary, a deeper look is taken at the crime, the case, the victims, and the man behind this horrific, calculated, and cruel attempt at taking someone's life for financial and personal gain.

You can catch The Parachute Murder Plot on ITV on Wednesday Oct. 17 at 9 p.m.

More like this
A New Netflix Doc Will Explore The Unsolved Murder Of Jill Dando
By Sam Ramsden
Eurovision Has Been Given A Whole New Look Ahead Of Its Liverpool Debut
By Bustle UK
'Boiling Point's TV Sequel Is Set To Deliver A “Rollercoaster Of Emotions”
By Catharina Cheung and Sophie McEvoy
Rupert Grint Just Shared A *Major* Update About Ron Weasley’s Future
By El Hunt
Get The Very Best Of Bustle/UK
Sign up for Bustle UK's twice-weekly newsletter, featuring the latest must-watch TV, moving personal stories, and expert advice on the hottest viral buys.