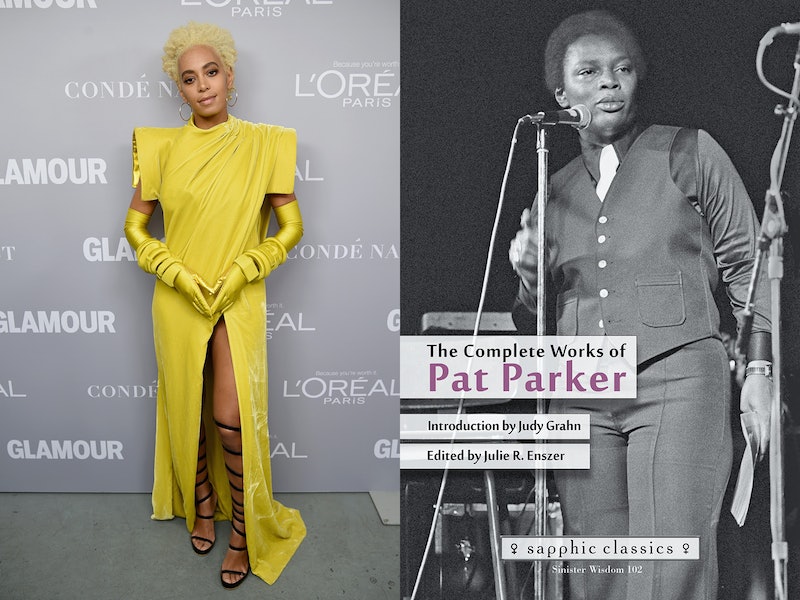 In case you've someone missed the news: Solange's new album, When I Get Home has the entire music world talking... and listening... and singing... and dancing. Like her sister Beyoncé, Solange uses her platform to pay tribute to the women who came before her. In addition to sampling Debbie Allen and Phylicia Rashad on the album, Solange also incorporated excerpts from Pat Parker's "Poem to Ann #2" on the album's 16th track, "Exit Scott (interlude)." If you haven't heard of her, let Solange's Pat Parker sample be your introduction in the work of the writer and activist.

Pat Parker was born in Houston in 1944, the youngest child of her working-class parents, Mary and Ernest Cooks. After graduating high school, Parker moved to California, where she received degrees from Los Angeles City College and San Francisco State College. Following the dissolution of two marriages in the 1960s and '70s, Parker began to openly identify as lesbian, and organized events in the Bay Area's black, lesbian, and feminist activist communities.

Her passion for activism led Parker to become a respected voice for women like herself. The Ubuntu Biography Project reports that she was "involve[d] with the Black Panther Party and Black Women’s Revolutionary Council," and helped to form the Women's Press Collective. According to the Poetry Foundation, "Parker worked for the Oakland Feminist Women’s Health Center from 1978 to 1987 and was involved in political activism around race, class, and sexuality, taking national leadership positions to help address women’s health issues, particularly regarding domestic and sexual violence." Parker would go on to testify before the U.N. and be part of delegations to Kenya and Ghana.

'The Complete Works of Pat Parker' by Pat Parker
Amazon

A friend and colleague of other influential black poets, such as Judy Grahn and Audre Lorde, Pat Parker published five poetry collections between 1972 and 1985: Child of Myself, Pit Stop, Womanslaughter, Movement in Black, and Jonestown & other madness. She also recorded a spoken-word album with Grahn, titled Where Would I Be Without You. In 2016, years after Parker's work had gone out of print, publisher A Midsummer Night's Press produced a complete Pat Parker collection, with an introduction by Grahn, as part of its Sapphic Classics series.

Solange's choice to sample Parker's poem on When I Get Home may remind fans of something the singer-songwriter's sister did, back in 2016. Beyoncé's Lemonade album also brought attention to a black poet's work, with several tracks pulling quotes from Warsan Shire's poem, "Women Who Are Difficult to Love," and from her chapbook, Teaching My Mother How to Give Birth. It seems that both sisters are more than dedicated to the poets and writers who preceded them.