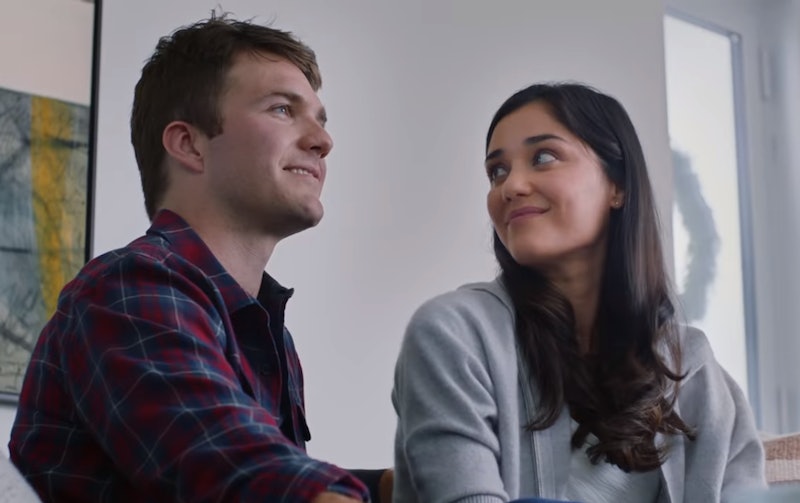 Just like his onscreen counterpart didn't understand why an exercise bike isn't exactly an ideal Christmas gift, the actor now known as Peloton Husband doesn't understand why people are offended by the now infamous commercial. In a new interview with People, actor Sean Hunter defended the controversial ad that finds a man gifting his wife with a stationary bicycle that costs $2,245. The 32-year-old has found himself at the epicenter of the uproar, but he told People the idea that the ad is sexist is "just a narrative I don’t see."

Hunter may not see it, but the internet certainly does. Social media users have called the husband in the ad controlling, and dubbed the commercial itself cringeworthy and sexist. Since Peloton Wife seems surprised to receive the bike, people believe it's a gift that she didn't ask for, and that her husband could be body-shaming her. Meanwhile, others have called it out for being elitist and out of touch, given the price of the bike (and the additional $39 per month classes the wife is seen taking). While some have defended Peloton, saying the ad is simply promoting a healthy lifestyle, the general consensus seems to be that overall, the company missed the marked.

As for Hunter, he may have only appeared in a few seconds of the spot, but he's still standing by the brand's message. "I think it’s important to discuss these issues and address the reasons why people feel this way," he told the publication. He continued by sharing a few alternative scenarios that would paint the gift of Peloton in a more positive light. "Maybe she asked for the Peloton for Christmas? Also, if she didn’t like it we could have returned it! It just seems like a negative narrative that some people are clinging on to."

The actor, who also works as a teacher, went on to praise the female presence on set. "Everyone worked together to create a positive commercial, which I still think it is," he told People. "I'm fully in support of the power of fitness!"

His costar, Monica Ruiz, who plays Peloton Wife has been less vocal about her feelings on the ad. However, she's also bounced back from the controversy with a starring role in a commercial for Ryan Reynolds' Aviation Gin. The ad was created in response to the controversy, and it features Ruiz at a bar looking shocked as she drinks gin with her friends. They tell her "you're safe here" and "You look great, by the way," a clear reference to her year-long fitness vlogging journey.

It seems that Ruiz is very much in on the joke, but her TV husband isn't quite there yet. "I think it’s great, I’m so happy for Monica," Hunter said of the gin commercial. "She's a tremendous actor and you can see the truth in her eyes. She's stressed at the start and wants to get rid of the publicity by finishing her drink and forgetting it all.”

That's certainly one interpretation of the ad, but it also seems like there's a narrative Hunter isn't considering — Reynolds' gin has set Peloton Wife free from her bike-riding prison. And everyone is thankful for it.

More like this
Pamela Anderson’s Dating & Marriage History Could Be Its Own TV Series
By Jake Viswanath
Helena Bonham Carter Doesn't Think 'The Crown' “Should Carry On"
By Sam Ramsden
The 2023 Super Bowl Commercials Feature A 'Breaking Bad' Reunion & Missy Elliott
By Alyssa Lapid
The 12 Most Controversial & Unexpected Grammy Moments Ever
By Jake Viswanath
Get Even More From Bustle — Sign Up For The Newsletter
From hair trends to relationship advice, our daily newsletter has everything you need to sound like a person who’s on TikTok, even if you aren’t.