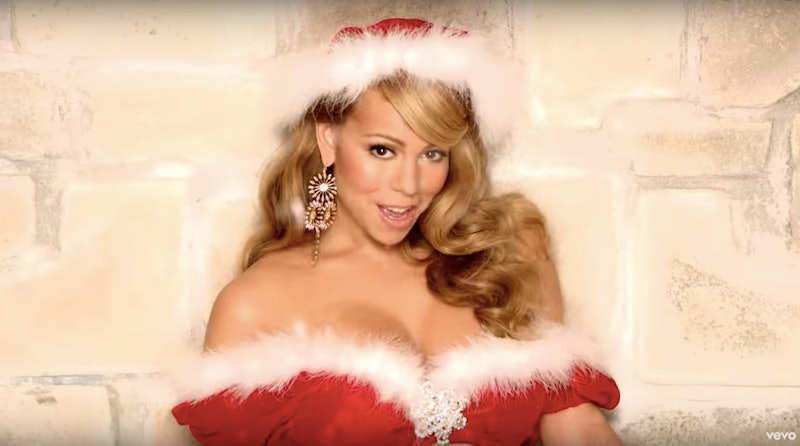 With the holiday season just around the corner, many will be preparing to get into the Christmas spirit by playing some of their favorite tunes of the season. Although it may seem a bit premature to some, there is such a huge assortment of music out there that you could very easily listen to a different Christmas song every week from now until the season ends. Sure, there are some people who feel that Christmas music should only be played after the Thanksgiving holiday. However, there seem to be just as many who love the season so much that they can't wait to be transported to the most festive time of the year — even if that means getting there a tad bit early.

So, if you find yourself searching for the perfect tunes to listen to as you begin decking your halls with boughs of holly, there's no need to look any further because this weekly playlist has you completely covered. From Halloween Day to New Year's Eve – here's a list of music that is sure to brighten — and maybe even frighten — your entire holiday season.

October 30 — "We Wish You A Scary Christmas" by Corey Burton

Although it may be the season of scaring and sharing candy with trick or treaters, the fact that Christmas is right around the corner is almost hard to ignore. You can have the best of both worlds by merging the spooky elements of Halloween and the magic of Christmas with a creepy tune from the soundtrack of the holiday horror film, Krampus.

November 6 — "This Christmas" by Donny Hathaway

As daylight savings time ends and the days become shorter, this soul classic will certainly help to set the scene for the holiday season. The song and it's joyful lyrics, which speak of togetherness during the holidays, should be part of everyone's holiday playlist.

With the big day now just a month away, the Christmas classic, "Jingle Bell Rock" and it's uptempo melody sets the tone for a happy and joyful holiday.

On this song, which has arguably become the most popular hip-hop Christmas tune in history, Run D.M.C shares the experience of celebrating Christmas in their neighborhood of Hollis, Queens, N.Y. The legendary trio makes mention of all of the amazing food that comes with the holiday season — something which will come in handy when coming up with the perfect menu for the week's Thanksgiving dinner.

With time nearing to have Christmas wish lists filled out, Eartha Kitt's sultry version of "Santa Baby" serves as a reminder that you should always ask for exactly what you want in life.

Spending time with those you love is certainly what the holiday season is all about. "All I Want for Christmas," which according to streaming data provided by iHeartRadio, is the most popular Christmas song of all time, making it an absolute must-hear for the month of December.

December 11 — "Rockin' Around the Christmas Tree" by Brenda Lee

Now that the countdown to Christmas Day is officially underway, there's no better song to listen to while trimming your tree than Brenda Lee's "Rockin' Around the Christmas Tree." The song's feel-good lyrics and dance-worthy beat make for a fun-filled decorating session with the entire fam.

This ubiquitous holiday tune "Feliz Navidad" is so infectious that it instantly lifts your spirits every time it plays. Written and sung by Puerto Rican musician José Feliciano, the song was noted by Billboard as one of the most downloaded Christmas songs in the United States and Canada in November 2016.

There's nothing more Christmasy-feeling than listening to Nat King Cole belt out “chestnuts roasting on an open fire” on Christmas Eve and Christmas Day. The song's descriptive summary helps to paint a vivid picture of what it's like to be home for the holidays.

With the seasonal celebration winding down, reflecting on happy moments of the past while listening to "It's The Most Wonderful Time Of The Year" is an awesome way to conclude the season and kick off the new year.

Much like the presence of Santa Claus, Christmas tress, and mistletoe, music plays an integral role in making the holiday season one of the most special times of the year.