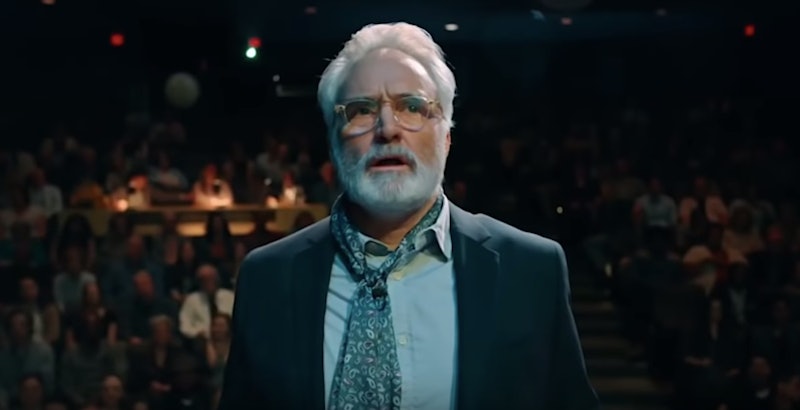 The start of fall signals the return of countless TV shows you already know and love. But this also means the debut of brand new pilots, eager to become your next Favorite Show. And while there are definitely a few must-see projects coming up this year, it's really the cast of NBC's Perfect Harmony that helps to give this particular series an edge on the competition. That's because there are a few very recognizable faces in the ensemble that are sure to attract a high number of followers.

Let's start with the most obvious member of the group: the legendary Mr. Bradley Whitford. The actor portrays Arthur Cochran, a former Princeton music professor who becomes the instructor of a small church choir that's in desperate need of someone with his expertise. But education can prove to be a two-way street and Arthur soon discovers that he needs his students just as much as they need him.

It's a touching storyline, to be sure, though it isn't the first promising project Whitford has been attached to. In fact, throughout his career the actor has acquired an impressive list of TV credits, including his role as Josh Lyman on The West Wing, Danny Tripp on Studio 60 on the Sunset Strip, Roger Peralta on Brooklyn Nine-Nine, and Commander Joseph Lawrence on The Handmaid's Tale. And just in case you're worried, based on those examples, that Whitford may be lacking experience in the comedy department, let's not forget his memorable portrayal as Billy's nemesis Eric Gordon in Billy Madison. So don't worry, this guy knows how to bring the funny.

However, when it comes to prominent household names, Whitford isn't the only cast member to fall under that category. Perfect Harmony also stars Anna Camp, who plays Ginny, one of the central choir members who will look to Arthur for guidance for vocal instruction and just general life advice, based on the trailer. Camp's best known for her portrayal of Aubrey in the Pitch Perfect films, thus making her the perfect candidate for a musical-based show. But she's also popped up in numerous TV shows over the years as well, such as True Blood, The Good Wife, Mad Men, Good Girls Revolt, Unbreakable Kimmy Schmidt, The Office, and The Mindy Project.

For her part, Camp believes that all of her past roles (which range from super serious to downright comical) have helped prepare her for this latest part.

"There are moments in this musical world, yes there's singing, yes it's super funny and there are lots of jokes, but there are some really grounded tended moments as well," Camp told E! News during a recent interview about Perfect Harmony. "And I think that all of the jobs that I've had, including Pitch Perfect, have all kind of led me to this moment."

Other cast members that you may not as easily recognize but will soon come to love, include Will Greenberg (Halt and Catch Fire, Wrecked), Tymberlee Hill (Drunk History, Grey's Anatomy), Geno Segers (Banshee, Teen Wolf), and Rizwan Manji (The Magicians, Schitt's Creek). So before you write this series off, let this talented group win you over. It just might prove to be music to your ears.

More like this
'It’s A Sin's Real-Life Jill Has An Important Message About Monkeypox
By Sam Ramsden
'Stranger Things' Season 5 Will Echo Season 1 In A Key Way, The Duffer Brothers Confirm
By Kadin Burnett and Sophie McEvoy
‘Squid Game’ Creator Hwang Dong-Hyuk Just Dropped A Major Season 2 Tease
By Brian Anthony Hernandez and Bustle Editors
Everything To Know About 'Evil' Season 4
By Meguire Hennes
Get Even More From Bustle — Sign Up For The Newsletter