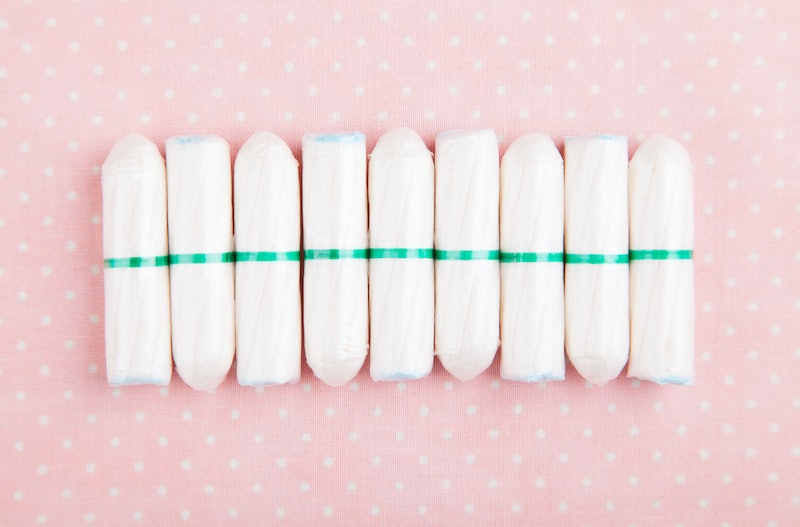 ThankfulPhotographer / Shutterstock
By Alice Broster
May 28, 2019

Over the last 12 months, the issue of period poverty has really been brought to the forefront. Thanks to campaigners and organisers, as well as research groups and charities, the government is knuckling down on a problem that is incredibly important for a wide breadth of society. The government has named the co-chairs of their Period Poverty Taskforce and they’re ready to put an end to period poverty once and for all. The Minister for Women and Equalities Penny Mordaunt announced her plans for the Taskforce shortly after International Women’s Day in March 2019 and it is the first of its kind in the UK.

On May 28, Menstrual Hygiene Day, the government announced that Mordaunt, Plan International UK, and Procter & Gamble would chair a Taskforce to end period poverty in the UK. The group will aim to tackle stigma around periods, improve education in schools, and increase accessibility of period products.

This news comes after the government announced that period products would be made available in primary and secondary schools, hospitals, and in police custody to those who need them. These changes were welcomed by campaigners such as Amika George, who started campaigning to end period poverty two years ago. George told the BBC that introducing period products in schools would make a “massive difference" for those who can’t afford them.

Research conducted by Plan International UK found that 71 percent of respondents reported feeling embarrassed when buying period products. Only 22 percent said they were comfortable talking to their teacher about their period. A shocking 49 percent said they had missed an entire day of school because of their period. Elsewhere, Plan International UK also found that 27 percent of people have overused sanitary products because they couldn't afford fresh ones.

The Taskforce will seek to eradicate the stigma surrounding periods and improve access to products for those who need them.

In a statement, Tanya Barron, the Chief Executive of Plan International UK said: “This is a golden opportunity to tackle the root causes of period poverty here in the UK, namely the high-cost of period products, lack of education and the stigma and shame that surrounds periods.” She continued:

“As co-chairs, we’ll be working hard to make sure the voices of UK girls are heard and that any course of action reflects their needs and concerns. Together we can put an end to period poverty and stigma once and for all.”

Campaigners, grassroots organisations, businesses, retailers, academics, and manufacturers will also work alongside the Taskforce to work out how to make period products more affordable, accessible, and improve the conversation around menstruation so it is less of a taboo.

Talking about the Taskforce in a statement the Minister for Women and Equalities, Penny Mordaunt said, “our two new co-chairs, Plan International UK and Procter & Gamble, have already produced impressive work around the country to improve access to period products and change old-fashioned attitudes to menstruation and break down taboos. Now, working together on the Period Poverty Taskforce, we can take action to create a strong and viable solution to period poverty in the UK.”

De-stigmatising the conversations around periods and opening up accessibility of products to those who need them is a crucial step in the total eradication of period poverty in the UK. Hopefully the government's new Taskforce is exactly what we need to achieve those goals.