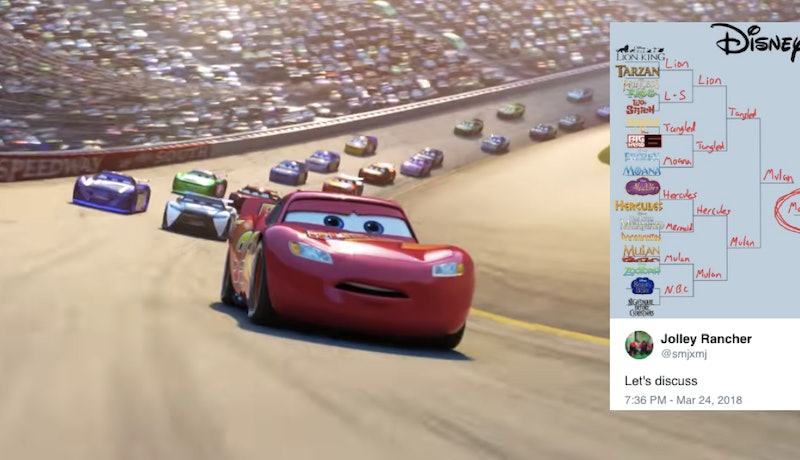 Not only has the internet been blessed with a March Madness-style bracket of the best Disney vs. Pixar movies, but it's making people on Twitter lose their minds. Since the Disney vs. Pixar bracket first appeared on user @yeeitsanthonyy's page, fellow user @smjxmj filled out the movie bracket which includes 34 Pixar and Disney movies, claiming 2001's Monsters, Inc. as the reigning champ. This winner has people riled up, and movie lovers are chiming in about every single step in the bracket that leads to that outcome. Everyone looking at the bracket will obviously have their own point of view on which films should trump others and why (which people have expressed on Twitter). But clearly, fans won't ever see eye-to-eye, because perhaps the "greatest" animated film just doesn't exist.

The biggest conflict seems to be over the fact that Cars 3 defeated Coco in the first round on the Pixar side. There's also major debate on Tangled defeating Lion King on Disney's side. The bracket even created competition within film franchises, like this poll asking Twitter users to vote for the best Toy Story installment. Now, people are getting in serious debates, also questioning if IMDb or Rotten Tomatoes is a more legitimate source for evaluating movie quality.

Alas, here's the filled-out Twitter bracket that will stand the test of time and has the internet up in arms:

People take their movie opinions seriously and they are super divided right now.

How could certain movies possibly be deemed better than others?

Especially when two epic ones are pit against one another?

If there's one thing people can agree on, it's how freaking entertaining this whole thing is:

Pixar and Disney's most iconic films, including Beauty and the Beast, Finding Nemo, Toy Story, and The Little Mermaid are included in this competition. There's a lot of room for debate, but let's unpack the first major source of conflict the bracket proses: Coco vs. Cars 3. When it came to critics, both films were well-received. Christopher Orr from The Atlantic deemed Coco an instant classic, saying the film, which celebrates Mexican culture, was "among Pixar's best movies in years." Cars 3 also made a great impression, as Rolling Stone's David Fear called it a "Cars movie worthy of the Pixar name." What are viewers saying now?

The Twitter user who posted the bracket defended both films, writing, "I just really connected with Cars 3 being about an injured racer trying to make it back bc I've been in the same situation. Knocking out Coco was tough though, it should’ve gone deeper with a better seeded bracket." Another user defended Cars 3, saying, "You're way off about Coco, it was just a rip-off of Book of Life. Cars & Toy Story are far superior!" Meanwhile, Coco received defenses like, "How does Coco lose to Cars?! I’m upset."

The second major debate is Tangled vs. Lion King. The latter, which premiered in 1994, is deemed a classic. It's had a wildly successful Broadway adaptation and is in the process of being made into a live-action version. Tangled, on the other hand, is newer and perhaps less known given its 2010 release. Common Sense media claimed Tangled was a great film for Disney and "a princess movie to rival its all-time greats."

Some users stand behind the classic Lion King, and one says, "HOW DOES TANGLED BEAT LION KING?! Pissed. This chart is invalid." Others, in Tangle's corner, explain why it's better than Lion King. "Lion King isn't even an original story. Minus points for stealing," a user wrote.

Now, the claws are out and the floodgates are open. There's also now debate on The Office vs. Scrubs and Marvel vs. DC Comics:

At least now we know we'll have endless entertainment on Twitter for the rest of our days.