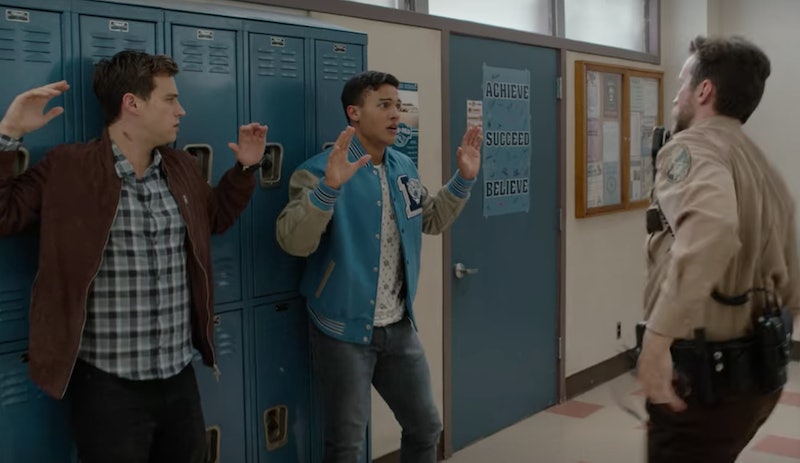 Spoilers ahead for all of Season 4 of 13 Reasons Why. 13 Reasons Why has courted controversy with how it's handled sensitive topics from the get-go. The first season's depiction of teen suicide was deemed "dangerous" by mental health experts. Season 2 included a thwarted school shooting, premiering just five and a half hours before a gunman opened fire at Santa Fe High School outside of Houston, Texas, killing at least 10 people. (In response, Netflix canceled the planned L.A. premiere event.) The Daily Beast amongst other outlets criticized the following season for "redeem[ing] a rapist." And this time around, the writers tackle police brutality. It's a timely storyline as Black Lives Matter protests fill the streets around the globe, but 13 Reason Why's look at police brutality and subsequent student-led protest against the police is unsurprisingly tone deaf.

The policing storyline occurs in Episode 8, when Liberty High students Diego and Justin — who have been feuding all season because Diego is dating Justin's ex, Jessica — get into a physical altercation. The fight is broken up by a school resource officer (SRO), but despite Justin having started the brawl, it's Latino student Diego who the white SRO targets and slams into the lockers. When Justin attempts to intervene, the SRO pulls a gun on both teens, but then only targets Diego for arrest once he holsters the weapon. This leads to Clay and Jessica staging a school wide walkout, which soon escalates into a riot aimed at the police.

This depiction of excessive force used against a person of color is particularly potent right now, as Americans are demanding sweeping changes (or the defunding of) law enforcement in the wake of the deaths of George Floyd, Breonna Taylor, Ahmaud Arbery, and countless other police brutality victims. That the racist SRO targets Diego, even though Justin started the fight, does ring true to life. Police departments are consistently whiter than the communities they police, and the NAACP Legal Defense Fund found that SROs are more likely to suspend Black and Latinx students than their white peers, according to the Washington Post. The Justice Policy Institute also found that having cops on school grounds results in Black and Latinx students getting sent to juvenile court 11 times more than they would without the SRO presence, thus creating a very clear school to prison pipeline.

The way our society criminalizes Black and Latinx youth is a pressing issue, one that 13 Reasons Why seemed poised to properly explore with Diego's arrest. But the student's ensuing walkout is instead hinged on their anger over the "oppressive police state" that Dean Foundry introduced with his metal detectors, cameras, SROs, and surveillance apps for parents. In fact, when the walkout properly gets under way, Diego magically reappears and the SRO is never seen again, like the arrest was just a clever plot device to help segue into the riot.

The entire protest suffers from similarly bad optics. Though student body president Jessica, who is biracially Black, starts the march and it was Diego who was arrested, it's white student Clay who ends up leading the riot. And a scene of Clay addressing the protesters is interspersed with shots of Alex (the white son of Deputy Standall), and Zach destroying Dean Foundry's office for fun with a baseball bat. Black Lives Matter demonstrators have already voiced concerns that it's the Black people who suffer when white protestors escalate and damage property, but in 13 Reasons Why Alex's actions are portrayed as comedic while Clay's are brave.

The writers also problematically fail to recognize the heightened risk there is for the school's students of color to participate in the riot. When Justin is being attacked, for example, it's Diego who lunges at a cop to save him. Though Tony expresses hesitance about participating because he's an undocumented Latino student, he rushes back to protect white classmate Tyler.

While there are moments of hostility between the police and the students throughout Season 4, overall the police are painted in a positive light. When Tony is arrested during the riot, a good white deputy intervenes and saves him, saying that he would've fought for his friends at Tony's age too. Earlier in the season, that same white deputy appeared to be racially profiling Tony, but it was then revealed he was just invested in helping Tony pursue boxing in college. When Justin is diagnosed with AIDS, Clay bursts into the sheriff's lobby and claims he has a gun, and Sheriff Diaz comforts Clay instead of punishing him.

The lasting message is that the police are good, and as a result 13 Reasons Why feels as if it ignores and trivializes the issue of systemic racism in law enforcement. This is particularly harmful at a time when people across the nation are speaking truth to power about that very issue.

All in all, 13 Reasons Why never seemed interested in engaging meaningfully with racism and police brutality. Though the writers had no way of knowing that the show would debut at such a tumultuous time, racism has also existed for centuries, so it's irresponsible that they even introduced it as a one-note plot point. With all the controversy that 13 Reasons Why has already faced, this final bungling of a heavy issue like racism ends the final season of 13 Reasons Why on a sour note.

More like this
Here’s Everything Coming To & Leaving Netflix In February
By Jake Viswanath
Everything To Know About A Potential 'Lockwood & Co.' Season 2
By Gretchen Smail
All The ’70s Easter Eggs You Missed In 'That ’90s Show'
By Grace Wehniainen
'The Crown' Season 6 Has Suspended Filming "Out Of Respect" For The Queen's Death
By Bustle Staff
Get Even More From Bustle — Sign Up For The Newsletter
From hair trends to relationship advice, our daily newsletter has everything you need to sound like a person who’s on TikTok, even if you aren’t.