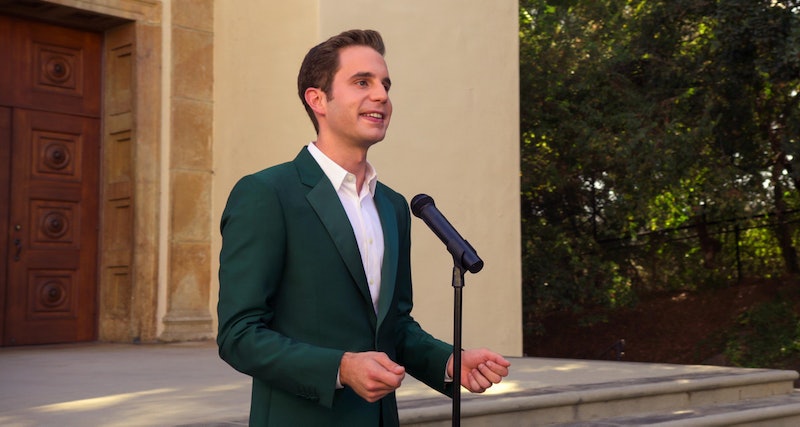 His name may not be uttered once throughout the entirety of The Politician, but the show's opening credits do include a sneaky reference to President Donald Trump. During the sequence, set to Sufjan Stevens' "Chicago," we're shown a number of compartments in a wooden model of main character Payton Hobart (Ben Platt), assumedly representing his inner essence. Among the contents inside are a series of books titled with the names of the five most recent presidents (excluding George H.W. Bush): Ronald Reagan, Bill Clinton, George W. Bush, and Barack Obama. Instead of Trump's name, the fifth book reads Idiot's Guide To Clowning. And if that weren't overt enough, there's also a Roman numeral XLV on the spine, as Trump is the 45th president of the United States.

There are some other lines in the show that could be interpreted as Trump references. For example, when Payton is discussing his ambition to become the U.S. president during a Harvards admissions interview in the opening scene. "It does seem to be the hot job everyone aspires to nowadays. The air of impossibility has been removed," one of his interviewers remarks. Payton also says, "People like to think of their presidents as characters they see on TV," which could easily be a dig at the fact that Trump hosted the reality series The Apprentice before his presidency.

Though The Politician's writers haven't directly addressed why they chose not to include Trump's name in the series, star Julia Schlaepfer, who plays Alice, told Bustle she thinks it makes the show more accessible. "[Young people watching aren't] being told, 'This is bad. It's a conversation. The whole show is a discussion."

That being said, Trump — or rather, his family — certainly had an influence on the show. "It's wealthy people behaving badly," series co-creator Ryan Murphy told The Hollywood Reporter. All of this has been percolating in the culture, particularly under this president and this idea of Ivanka [Trump] and Jared [Kushner] [as] the sort of satanic poster boy and girl for privilege and nepotism."

In fact, Trump's son-in-law Jared Kushner was the impetus for a large part of the plot. "This guy was walking around with the pride of being a Harvard graduate, and the reality was that he didn't belong there. I said, 'We've got to tell that story,'" co-creator Brad Falchuck recalled in the same interview, referencing Kushner's acceptance to Harvard after his father donated $2.5 million to the school.

And certainly, Murphy has referenced Trump in his other work: Season 7 of his FX show American Horror Story, titled Cult, began with the 2016 presidential election, ultimately exploring "the rise of a cult of personality that can rise in a divided society," Murphy told Variety in 2017. He also wanted to include Donald Trump as a character in Pose, but ultimately didn't go through with it. "I just don't want to see him. I didn't want to see that face or hear that voice. I didn't want his presence to pollute something I thought was beautiful," he said at a 2018 event, per THR.

Perhaps he didn't want Trump to pollute The Politician either — but he just couldn't resist a few sneaky jokes.