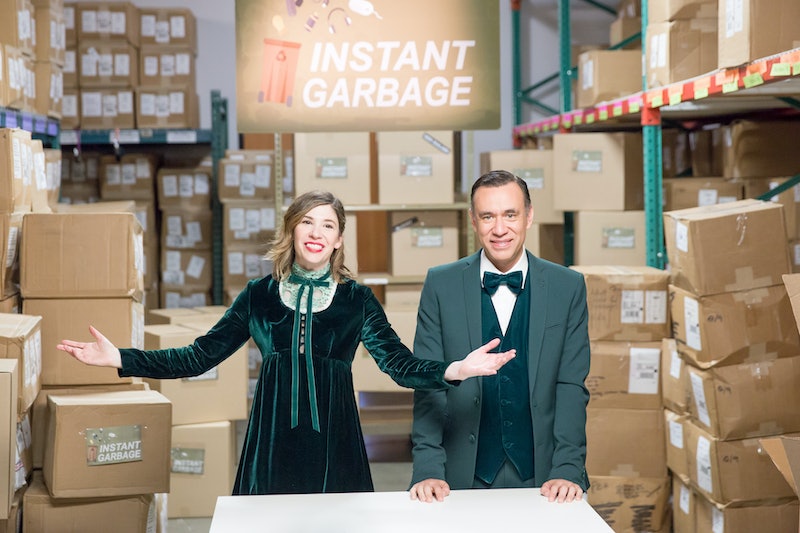 Fans of Portlandia really only need Fred Armisen and Carrie Brownstein (and maybe Kyle MacLachlan's Mayor) to make them happy, but the guest stars of Portlandia always add a delightful element to the IFC show. So in advance of the premiere of Portlandia Season 7 on Thursday, Jan. 5 at 10 p.m., IFC announced the guest star list for the latest season of the sketch comedy series. And just like with the previous seasons, a quirky blend of comedians and unexpected celebrities will be joining Armisen and Brownstein in their hilarious antics.

As my personal life goal is to make an appearance on an episode, I'm pretty envious of the Portlandia Season 7 guest stars. The talented people on this list are traveling to Armisen and Brownstein's vision of Portland, Oregon, for the first time to portray eclectic characters or make some cameos. These Portlandia newbies will be accompanied by seasoned guest stars of the IFC series like Saturday Night Live's Vanessa Bayer, Steve Buscemi, Mitch Hurwitz, Natasha Lyonne, Kumail Nanjiani, and Wilco's Jeff Tweedy. MacLachlan will also be back for Season 7 because, honestly, what's a season of Portlandia without the Mayor of Portland? Even if Carrie chose not to have his child in Season 6, he's still an integral part of the wacky series that lovingly mocks the absurdities of the Portland counterculture.

Although you're probably excited enough as it is, get even more pumped for Portlandia Season 7 by checking out the new guest stars. As Brownstein said in the above video, "It's pretty chock-full this year."