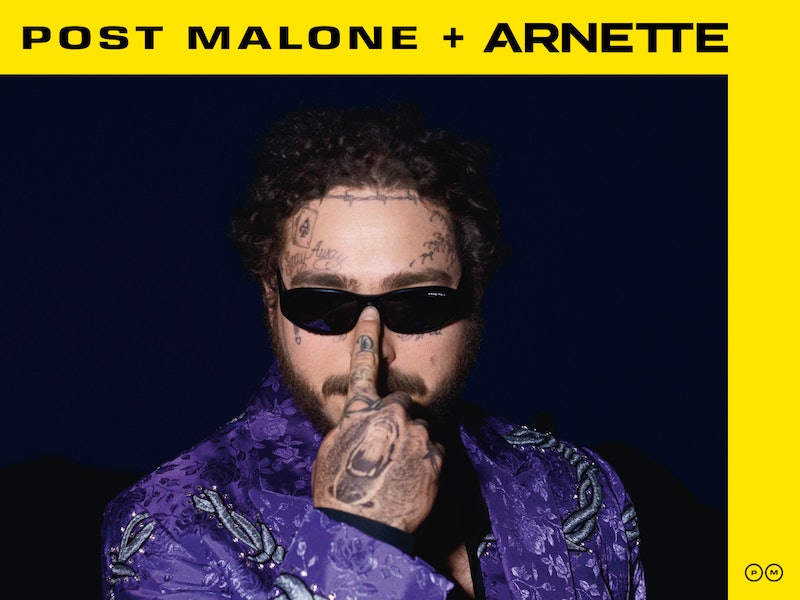 Post Malone is taking your eyewear back to the '90s. The "Better Now" rapper was announced as California-based sunglasses brand Arnette's brand ambassador in May, but Sept. 17 finally marks the first Post Malone x Arnette sunglasses line drop. The brand — which is a favorite among surfers, skaters, and snowboarders — launched in 1992, and maintains a throwback aesthetic. As a complement, Post Malone is now lending his laid-back, '90s style to his inaugural Arnette capsule collection, giving fans three frames to choose from.

Dubbed the Post Malone Signature Style range, the collection's tagline is, "What never tried to be in fashion will never go out." The three new frames are meant to be as "bold and unconventional" as Post Malone himself, according the the brand's press release. So if you enjoy Post Malone's anti-fashion style, these frames will help elevate your outfits in a non-conformist way.

The Posty Signature Style frames look like the sporty shades that windsurfers would wear in the '90s, but they can just as easily work with a black turtleneck or floral dress in 2019. The Posty Signature Style is just one frame, but comes in three colorway options. The standout color combo is the hornet yellow frame with black lenses that the brand says is "tinted like a Sugar Wraith whip."

For those who are not up to date with Post Malone's singles, "Sugar Wraith" is a track off of his Beerbongs & Bentleys album, and is a play on words for the Rolls Royce Wraith.

The second colorway features black frames with black tinted lenses, making it the most minimalist choice.

The last option in the Posty Signature Style capsule is the black frame colorway with honey yellow tinted lenses. It's arguably the most '90s look in the bunch.

With the Posty Signature Style release, Arnette is also dropping an accompanying Street Style collection that consists of an existing sun and optical frame design. The Street Style sunglasses are dubbed "Lizard," and they are "cold blooded like Posty’s iguana Karl."

Lizard is a grungy spin on an Arnette classic design, and it comes in four different colorways.

The optical frames from the Street Style collection are called "Bobby," and they echo Dallas style in the 1970s. The Bobby readers are a pair of "serious glasses with a sensitive side." The retro frames can be found at LensCrafters, and they come in four different colorways.

All the frames also have the added benefit of being sustainable. Both the Posty Signature Style capsule and the Street Style collection has frames made from bio-based BTR600 plastic.

“I wear Crocs everywhere, from the bar to the stage, and I felt it was the perfect collaboration to get together with Crocs and give the fans what they’ve been asking for," Post Malone said in a press release.

A month later, in Dec. 2018, Crocs dropped the limited-edition Post Malone X Crocs Barbed Wire Clog. The shoe was wrapped in illustrated barbed wire, just like the wire tattoo inked across the artist's forehead and knuckles.

From sunglasses to shoes, Post Malone is revamping accessories with his unique aesthetic.