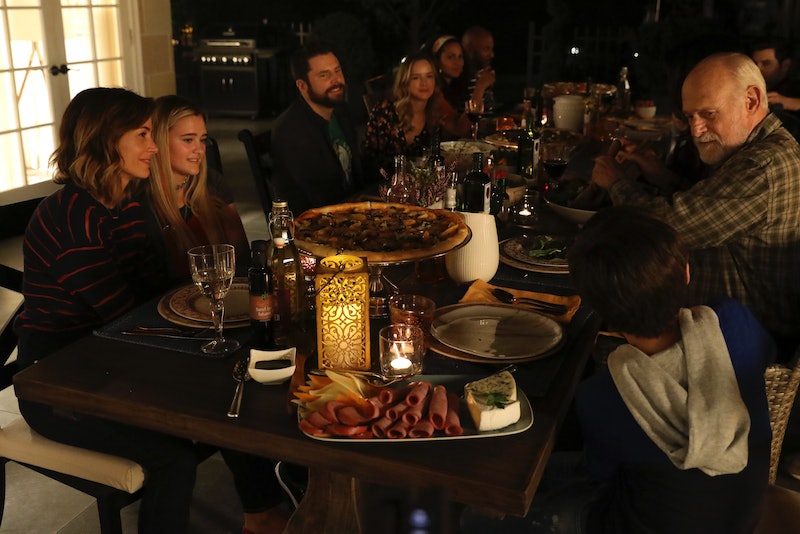 The characters on A Million Little Things have plenty of worries in their collective lives right now, but what's adding one more dash of fuel to the fire? Eddie and Delilah were sleeping together, Rome is depressed, Maggie's cancer is back, and, all along, Jon is dead. Just when the group seemed to be finding the beginnings of their equilibrium again, there's one more major discovery that's about to be uncovered — who is pregnant on A Million Little Things? This friend group may get more complicated in the coming months.

A preview for the Oct. 24 episode of A Million Little Things shows Rome finding a pregnancy test and the other guys telling him congratulations. Cut to Rome confronting his wife, Regina, about the pregnancy test and Regina telling him that the test wasn't hers. Uh, say what now? It's not to say that Regina and Rome are in a good place to have a child right now anyway. Rome just told Regina that he needed to quit his job to keep his sanity, and Regina was all, "we don't have kids! We can sell this place and rent something smaller! We'll make it work." Those are basically everyone's famous last words. But since Regina is denying the pregnancy test is hers, let's take a look at who else could be pregnant on A Million Little Things.

If Delilah is pregnant, the baby is probably Eddie's, because they were having an affair that almost blew the friend group up after Jon's death. We don't know for certain whether or not Jon knew about the affair before he died, but he would certainly not be happy if his wife was pregnant by another man — his friend, specifically. If Delilah is pregnant and it's Jon's, well, that's sadder, because that child won't get to know him.

Maggie has secrets, namely that she's run away from her home because she's running away from her cancer diagnosis — her breast cancer has come back, and now it's in her lymph nodes. But she's not seeking treatment because she just can't do it again. She's also not telling Gary about her cancer coming back. If she doesn't get treatment, her doctor told her she wouldn't make it a year. Being pregnant is the least of Maggie would need to worry about, in all honesty.

Ashley is Jon's assistant, and she knows everything about his life. She also seems to have appreciated Jon more than he might have known, especially because she told Delilah something about love sneaking up on you and it choosing you instead of you choosing whom to love. Then, she lovingly caressed Jon's old dry cleaning. If Ashley is pregnant and the baby is Jon's, it means that Ashley and Jon were having an affair, too, which is more information than viewers have had so far.

Eddie's wife, Katherine, just got the shock of her life when she found out that Eddie and Delilah have been sleeping together for... quite a while. Still, as she says, she has to be strong, and that's even harder than not being strong sometimes. Being the one who has to take the brunt of the force isn't as easy as it looks. If Katherine were pregnant, it may glue Katherine and Eddie closer together or drive them further apart. Their relationship is already on the brink.

It's not so much that being pregnant or having a baby is a problem in general, but in the case of these people, who already are hiding so many other things from each other, it's a big deal. No matter who is with child, this news is certain to change everything on A Million Little Things... again.