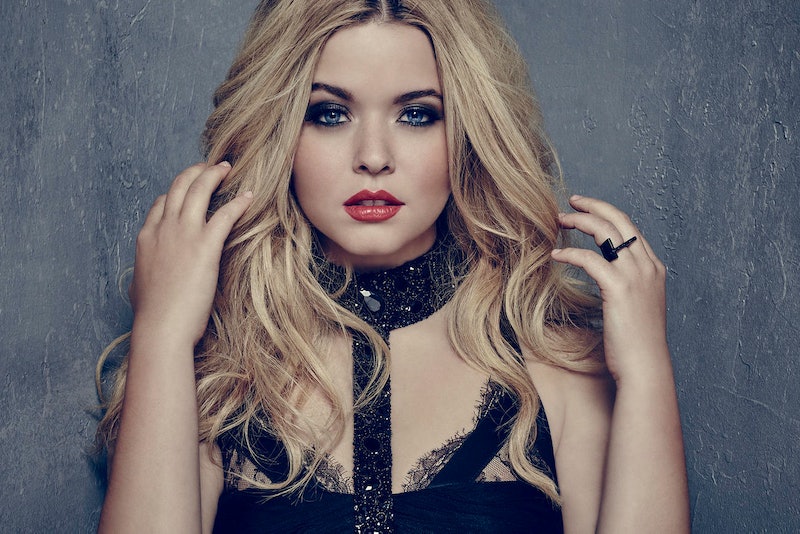 The final season of Pretty Little Liars premieres in April, and it'll be the end of an era. The show's fanbase is nothing if not devoted, and we've spent the past seven years theorizing and speculating about every single question and mystery. In an interview with Bustle, Sasha Pieterse whose new movie Coin Heist is now streaming on Netflix, describes Pretty Little Liars Season 7B as "romantic, dark, and serious."

"There's a lot of focus on relationships in the final season," Pieterse says. She can tell us there will be wedding bells in Season 7B, but we'll have to wait to see who walks down the aisle. Ezra and Aria's future is definitely questionable now that Nicole is back in the picture (as we learned in the 7A finale, she's very much alive). Pieterse notes that it'll be a new dynamic because "usually it’s Aria deciding between Ezra and another guy, and now it’s Ezra choosing between her and Nicole."

And, of course, the relationships between the Liars will remain front and center. "It’s a cool dynamic to see how Emily helps Alison with her pregnancy, and how it brings all the girls closer together," Pieterse says. But, it won't all be smooth sailing — she teases that there will be several betrayals and one will be a big surprise because it's from "someone that you wouldn’t really expect." (I don't know about you, but I'm already making a suspect list.)

The series finale is a two-hour episode that Pieterse describes as "a love note to the fans for an amazing seven years and everything they’ve done and how much they’ve loved us and supported us." Although she assures us that fans will love the conclusion, the season itself will be an emotional roller coaster and we're in for plenty of surprises along the way.

Pieterse describes her experience on Pretty Little Liars as a blessing and says, "I don't think anything will ever be as special." But, she's excited for the future — she has an upcoming role that she says will show viewers a totally different side of her and, as Coin Heist proves, she's extremely versatile. Pieterse also loves to write dark dramas and has aspirations to write and produce her own projects — so, although Ali will certainly be missed, we can look forward to more amazing work from the actor who brought her to life.