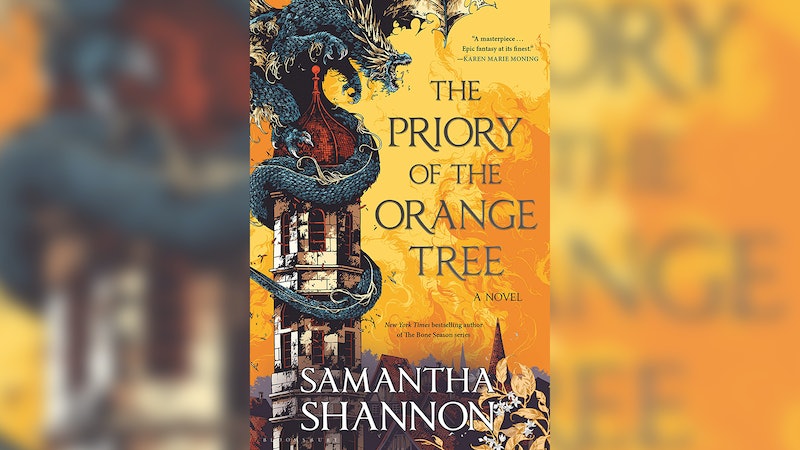 You have to ask yourself a few questions before picking up a long book: Will this book be able to hold my attention for the 800 plus pages? Will I be able to keep track of its many characters? Will I even be able to hold this book up?! And, perhaps the most important: Will this book be worth the time it takes to read it? In the case of Samantha Shannon's latest novel, the answer to that last question is a vibrant, resounding hell yes. A captivating story about queens, priestesses, warriors, and dragons, The Priory of the Orange Tree is an epic feminist fantasy that is perfect for fans of Game of Thrones.

The internationally bestselling author of The Bone Series, Shannon is no stranger to the world of fantasy, but her new standalone novel The Priory of the Orange Tree surpasses the depth and breadth of any of her previous books. It is an epic high fantasy — emphasis on the epic — set in a intricately built world ruled by women, where dragons and monsters have not only survived, but thrived.

A captivating story of queens, priestesses, warriors, and dragons, The Priory of the Orange Tree is an epic feminist fantasy.

Over 1,000 years ago, the world was seized by chaos, violence, and imbalance. The Nameless One, a vicious fire-breathing dragon hell-bent on the destruction of humankind, ruled over a land plagued by sickness and populated by the kind of creatures usually found in nightmares. Hope was all but lost when the great Galian Berethnet took up his fabled sword Ascalon and battled the Nameless One. Berethnet drove the dragon to the Abyss, and long as a queen descended from knight-turned-Saint Galian Berethnet sits on the throne, legend says, the Abyss is where the Nameless One will stay.

That is why Queen Sabran must conceive a daughter, to protect the Virtudom from death, destruction, and the return of the wyvern. She has enemies everywhere, and the assassins are getting closer with every attempt on her life. If she can give birth to a girl, she knows her people — and her family's legacy — will be safe.

'The Priory of the Orange Tree' by Samantha Shannon
Amazon

But Ead Duryan, a secret priestess tasked with protecting the queen by the Prioress herself, knows a different version of the Saint's story, one in which a woman was the true hero. According to everything Ead knows, it was actually Sabran's distant relative Cleolind Selinyu who ended the Nameless One's reign of terror — only she can't say a thing about it. All she can do is use her years of magical training and her increasingly close position to the queen to keep her safe.

Across the sea, Tané knows there is only way to truly keep the world safe, and it isn't by fearing the power of dragons. It's by embracing it. That is why she has trained her whole life to become a dragonrider, a fierce soldier bonded with an Eastern dragon who shares the same goal: To keep the Nameless One at bay.

There are whispers on the wind that danger is brewing in the kingdom, that deep down in the Abyss, the Nameless One is stirring. Sabran believes if she can conceive a daughter, she can prevent evil’s return and save her people from certain death. Like the others at the Priory, Ead is unsure of the legend’s truth, but that doesn’t stop her from doing whatever it takes to keep the queen safe. Tané, meanwhile, is certain that it will be the dragons of the East and their riders that will save the realm from certain doom.

Whose beliefs, whose prophecy, comes true in the end? That is one of the questions The Priory of the Orange Tree asks, but it isn't the only one the novel is interested in answering. Through its layered narrative and its inclusion, and often subversion, of fantasy tropes, The Priory of the Orange Tree explores the slippery nature of storytelling itself. The author's presentation of many different versions of the same legend invites the reader to consider the conflict between truth and the histories and cultural narratives you believe to be true. “'That is the problem with stories, child,'" the Prioress tells Ead before sending her to protect Sabran at court. "'The truth in them cannot be weighed.'”

Through its layered narrative and its inclusion, and often subversion, of fantasy tropes, The Priory of the Orange Tree explores the slippery nature of storytelling itself.

Even in this fantasy world, women are subjected sexism and violence at the hands of patriarchal forces that seek to see them dethroned or otherwise dissuaded from claiming power. While that may be true — while some of the ancient heroines in the land of Virtudom have been forgotten, Shannon's powerful storytelling ensures the women in her novel won't be.

A rich and engaging high fantasy novel that puts women and their stories front and center, The Priory of the Orange Tree will pull you into its magical world from the first page. And on its last, you'll find yourself wanting to stay just a little bit longer, or take a piece of it with you when you go.