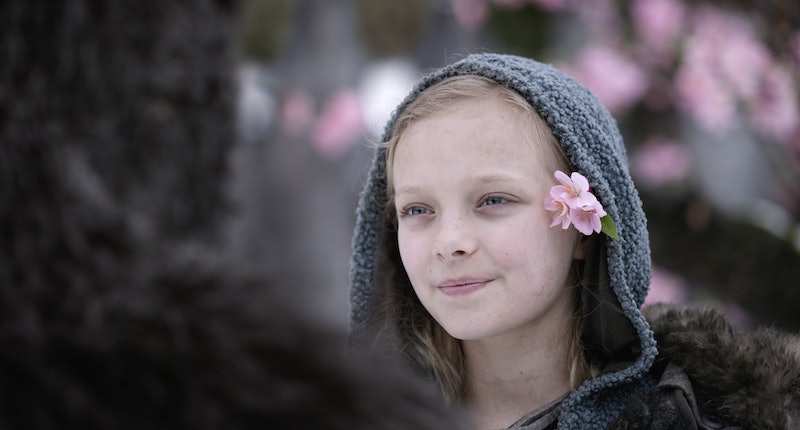 Like countless others, I consider one of my favorite movies of the year so far to be Logan, in no small part because of its pint-sized, claw-wielding heroine, Laura. And, like many people, I can't wait for the Season 2 premiere of Stranger Things in October, due largely to the presence of Eleven, everyone's favorite, Eggo-eating tween. And earlier this month, when I saw War for the Planet of the Apes, I found myself swooning over the character of Nova, a bold young girl who befriends the orangutan Maurice. All these little girls are strong, capable, and totally badass — but, disturbingly, they're also all almost completely silent.

As Vulture writer Emily Yoshida first noted in an article written around Logan's March release, Hollywood has a bit of an obsession with young, female characters who use their fists, not their words. From Laura to Eleven to, from years earlier, River Tam of Firefly, these girls share both the ability to physically destroy their opponents and a tendency to stay nearly totally silent while doing so. Sure, Laura breaks out her Spanish at a few points during Logan, but for the majority of the movie, she's mute — even while she's using her claws to painfully maim her enemies. And even though Eleven speaks on occasion in Stranger Things, she's far quieter than her male peers, choosing to let her often violent actions speak for themselves. The trend continues in Planet of the Apes, with Nova taking on villains, but only communicating in signs.

The quietness of these girls doesn't detract from the power of their actions, but, as Yoshida pointed out, it is frustrating; their lack of communication takes away from their complexities as characters, and as such, they become completely defined by their bold, often violent behaviors, rather than simply enhanced by them. Yes, it's progressive and important to see young girls kicking butt on-screen, but if they can't speak for themselves or have fully-developed personalities like their male counterparts, then something's clearly wrong. And it's even more damaging when, like in Planet of the Apes, the tiny heroine is one of the only female characters to appear on-screen at all; dozens of male characters get to speak freely, but the only girl featured at all doesn't get to say a single word.

Audiences, especially young, female viewers, deserve to see pre-teen heroines who are as complex as the countless boys we see in movies and TV shows every year. There are so few female characters, particular kids and teens, who are allowed to be strong and smart and determined — why should the ones we have only be defined by their physical prowess, when they have the potential for so much more? Seeing these girls be as badass in action scenes as boys have for years is great, no question, but we shouldn't have to settle for just that.

The good news is, though, that we don't have to. We, as audiences, have the power to encourage Hollywood to give these little girls their voices, by demanding the changes we can clearly see are needed. When we watch yet another movie or TV show with a strong, silent young heroine, let's stop idolizing her, and instead ask the writers behind her why she doesn't get to speak her piece. Tweet these writers your thoughts, and highlight the few young female characters who do get to be both badass and vocal, like Game of Thrones' Arya or Kick-Ass' Hit-Girl. These girls are incredibly powerful, but they also have full personalities and interesting character arcs.

It's so easy to see a girl like Laura or Nova, and be so distracted by their butt-kicking abilities that their problematic silence gets unnoticed; I know I, for one, was guilty of doing this during Stranger Things and Logan — it was only while watching Planet of the Apes that something finally clicked. There's been such a dearth of young female heroes that finally getting a few of them feels like a gift we shouldn't dare question. But change doesn't come until we start demanding more — and, after enough of us use our voices, perhaps more fighting little girls will, too.