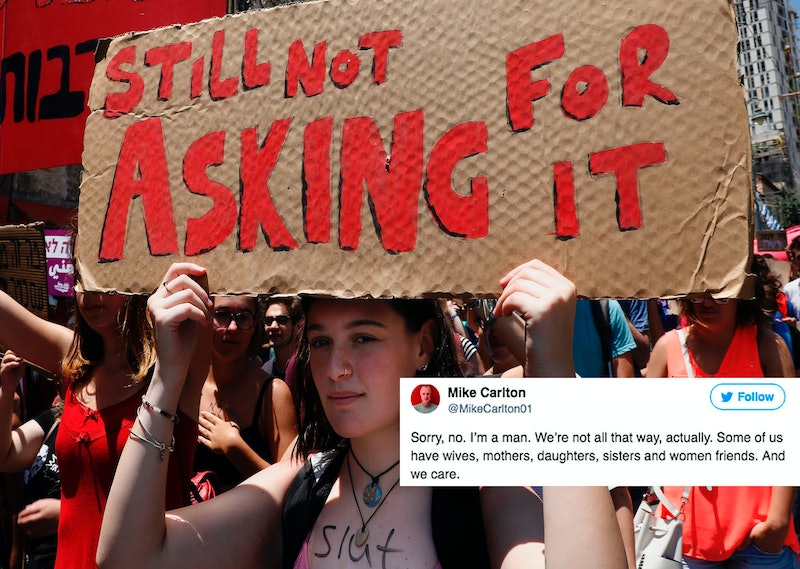 If you've seen the "Me Too" posts, where victims of sexual harassment and assault to post "Me Too", allowing the online community to get a sense of just go how widespread this type of behavior is, you already know that response has been deafening. Since the #MeToo hashtag took off, 12 million women have participated, showing that that sexual assault and harassment is everywhere. And the truth is becoming clear: far too many women you know have been victims of some kind of unwanted sexual advance or assault, even if they've never mentioned it to you.

Sharing #MeToo is about more than just awareness; it's about catharsis. There's safety in numbers and the sheer force of this wave has created an environment where some women will be comfortable coming forward, even if they haven't before — it's about them. It's about women getting a chance to speak and the world actually listening.

What it's not about though, is men completely co-opting this space. We need male allies, of course. We need men to see more, to say more, to do more. But there are different ways to do that. I'm not saying that men should be silent as women share their sexual harassment and assault women experiences — but they should be listening before they speak and, if they do speak out about the issue, they better be damned sure it's constructive.

Are men victims of sexual abuse? Absolutely. Should they be more encouraged to speak out and be made to feel safe, respected, and listened to? Of course. But women are finally being able to air their trauma — and it can't, can't, can't be treated as competition. This isn't a battle of injustice. This isn't tit for tat.

Too many men on Twitter are pointing out the fact that men are also abused, like that somehow erased female victims and the fact the vast majority of harassers and abusers are men. Even though there are claims that a wall of silence and complicity from Hollywood men may have been at play in the Harvey Weinstein sexual harassment allegations, some men are taking #MeToo to point out that sometimes women are harassers. And of course they are, but what the hell does that have to do with this?

And then comes the battle cry of "Not All Men". Some men rush in immediately to remind us all that not all men are rapists and harassers. And of course they aren't, but that doesn't change the fact that toxic masculinity exists, that rape culture exists, that we live in world where sexual harassment and abuse of women at the hands of men has been normalized. It doesn't matter that not all of them do — it matters that too many of them do. Why isn't that enough?

Why do the #NotAllMen supporters feel that every single man would have to be a rapist for there to be criticism? Women are being harassed and assaulted, but that's not enough. What kind of rock bottom to they require?

Instead of rushing to point out that they don't harass women — and expecting praise, likes, and retweets for, I don't know, not being someone that takes assaults women — why not focus their efforts on listening to women and helping to educate men. Because this isn't about them; this is about an endemic problem in not only Hollywood, but in our country and in the world as whole. If a man saw someone being sexually assaulted, should they just point at all of the men outside not abusing someone? No. So what the hell are the #NotAllMen guys doing now?

They should be doing standing up because they're a decent human being. Not because they have a sister, a daughter, a mother, or any type of female relative. They should be doing it because they see women as humans. You shouldn't need a black friend or relative to know that racism is bad. Men shouldn't need a women who shares their DNA to know that women are people. And if it took that to help them wake up, then they need to do some real soul searching before they point out that not all men are predators.

And if men really want to show that #NotAllMen are the problem, then why not do something about it? Work to end street harassment, make sure workplaces have an anonymous way of reporting sexual harassment, and ask women how to help. Don't just point out every man around you who isn't harassing someone. Do something to change the problem, rather than just detracting from victims brave enough to speak up.

The Me Too movement has been powerful because it's shown the sheer extent of sexual harassment and abuse. And we need men to participate, to engage, to wake up, and to show up. And if guys have something constructive to add or want to put their newfound awareness to productive work, they should go for it. But if this is about PR on behalf of men, they should kindly save it for another time. We have work to do.