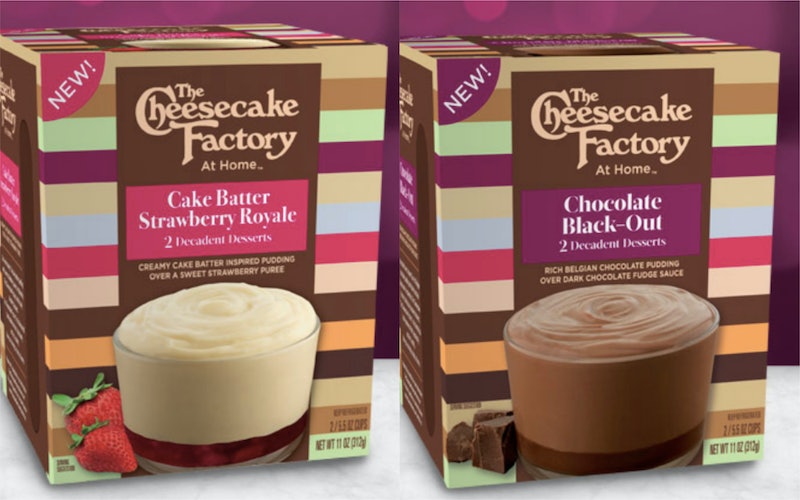 Cheesecake Factory stans, rejoice: you no longer have to endure the tyranny of putting on pants and making eye contact with other human beings to enjoy yourself a taste of the chain's iconic desserts. The Cheesecake Factory at Home pudding line is sold right in your very own local grocery store, where you now have the power to purchase one of the four flavors in packs of two, take it home, and proceed to consume it on your own time and at your own leisure without anyone side-eyeing you, saying things like, "Could you please keep down the moaning, Emma, we're in public," or similar mood killers you may have endured from friends and family while dining out.

The flavors from the pudding line include Cake Batter Strawberry Royale, Chocolate Black-Out, Vanilla Fudge Duet, and Salted Caramel Delight, which are, incidentally, the names I am giving my first four children. Per the Cheesecake Factory's website, the strawberry flavor is "Creamy cake batter-inspired pudding over a sweet strawberry puree," the chocolate one is, "Rich Belgian chocolate pudding over dark chocolate fudge sauce," the vanilla is "Creamy vanilla bean pudding over dark chocolate fudge sauce," and the caramel is "Creamy salted caramel pudding over rich caramel sauce." While they aren't named explicitly after any of the Cheesecake Factory's cheesecake flavors, the site says they are ~inspired~ by them. (Incidentally, I am inspired by them, too.)

The puddings appear to be relatively new, if an Instagram post from @junkfoodmom is any indication; she was able to find the caramel and strawberry flavors, both of which said "new" in the top left corner, similar to the Cheesecake Factory's website. Her Instagram of it shows what the pudding cups look like on the inside; fair warning, you may drool on your keyboard.

The Instagram on @junkfoodmom's page indicated the puddings were found at Walmart, and emphasized that they are, true to their name, puddings: "dove into these fully expecting them to be Cheesecake desserts ... Nope - these are pudding desserts," reads the caption. "Cake Batter and Strawberry was ok. Didn’t taste much cake batter flavor tho." She gave The Salted Caramel Delight a 100 emoji, writing, "My cup was empty before you could say Cheese....cake." She recommends everyone try at least one, iterating that they are "Ultra smooth with plenty of goodness on the bottom."

This is just one of a few offerings in the "Cheesecake At Home" line, which includes the iconic brown bread, available to purchase in grocery stores nationwide. While we as a species all did a pretty good job of sounding the alarm bells on that when it hit the scene a few years ago, you may not have realized the line includes other items like these puddings, as well as chocolates, cheesecake slices, coffee creamer, and, y'know, entire cheesecakes. (Mood.)

That being said, none of these options will ever ring louder than the siren call of a Cheesecake Factory menu larger than the seventh Harry Potter book, or the majesty of taking fresh brown bread, fried mac and cheese, and red velvet cheesecake to the face in 30 minutes or less. Happy cheesing, y'all.