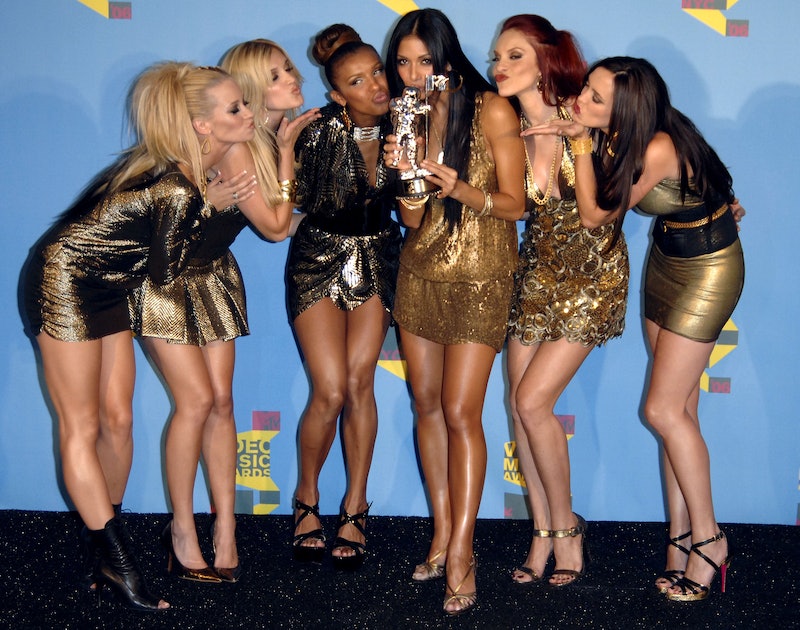 In the ultimate end of decade performance, the Pussycat Dolls reunited for the first time in nearly 10 years — and announced a 2020 reunion tour. The girl group comprised of Nicole Scherzinger, Ashley Roberts, Jessica Sutta, Carmit Bachar, and Kimberly Wyatt took the stage at the U.K.’s The X Factor: Celebrity Final on Saturday, Nov. 30, and performed a medley of their classics from the early aughts. “Buttons,” “Don’t Cha,” and “When I Grow Up” led up to the debut of the group’s newest track, “React.”

Prior to the performance, Scherzinger announced an April 2020 Pussycat Dolls reunion tour across the U.K. on social media. She wrote on Twitter, “I am very excited to share that we are back, baby!” and revealed that tickets officially go on sale on Sunday, Dec. 1. The nine-day reunion tour kicks off on April 5 in Dublin, Ireland and concludes on April 17 in London, England.

In an interview with BBC on Nov. 28, the group revealed that the reunion was years in the making. Wyatt said, “I think ultimately there's some unfinished business with the Pussycat Dolls.” While the reunion news delighted fans, many noticed that one longtime member is noticeably absent: Melody Thornton. Roberts explained to the BBC, “Mel's got a lot of projects going on in life. She was included in all of this. She's our sister, the door is always open, but it just wasn't the right timing for her."

The Pussycat Dolls famously split in 2010 to pursue solo careers. The girl group released two albums, 2005’s PCD and 2008’s Doll Domination, prior to their split. In an interview with Ryan Seacrest at the time, Scherzinger said of the split, “They want to do their own projects and stuff. It’s up to them what they want to do, and I just think, whatever makes them happy, we’ve been at it for a strong six years.” The group had also long been rumored to have tension among its members.

In an episode of I'm a Celebrity...Get Me Out of Here! in November 2012, Roberts offered some insights into the group’s dynamic and said only Scherzinger was allowed to speak on the band’s behalf. “Even in the group I wasn’t allowed to talk, we were told to be quiet. Only Nicole was allowed to talk, we would occasionally pitch in,” she said, as per the Daily Mail. When asked if that drove her nuts, she added, “Why do you think the band broke up?"

In the group’s interview with BBC, Scherzinger dispelled rumors of a rift amid the group’s reunion and said the girls have “evolved.” Scherzinger said, “Naturally, when you're so close, there may be some disagreements, some arguments. But that's the beauty, what makes you stronger. We've evolved so much. Like, bye drama! We want this to be really enjoyable for us."

More like this
The Jonas Brothers' New Album Has A Very Meta Name
By Alyssa Lapid
The Spice Girls Are Set To Reunite At King Charles III’s Coronation
By Sam Ramsden
Cruz Beckham Teased New Music With An Adorable Nod To Mom Victoria Beckham
By Stephanie Topacio Long
This Girls Aloud x Sugababes Collab Still Hits All The Right Notes
By Sophie McEvoy
Get Even More From Bustle — Sign Up For The Newsletter
From hair trends to relationship advice, our daily newsletter has everything you need to sound like a person who’s on TikTok, even if you aren’t.