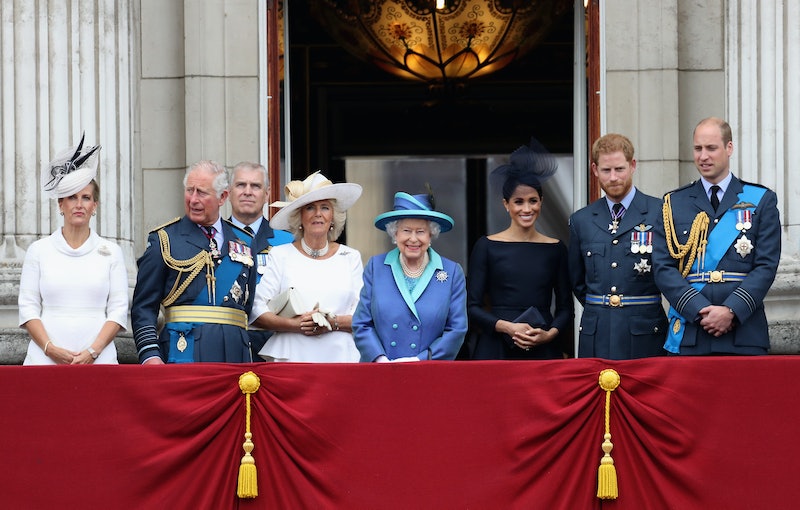 Brexit, you might have noticed, isn't going especially well at present. And with less than two months until the UK is scheduled to leave the European Union — and no concrete deal in sight — the country is growing more fraught by the day. Now, secret plans from the government's Cabinet Office indicate that the Queen could be evacuated after a no-deal Brexit, in the event that the UK's chaotic departure from the EU results in civil unrest.

As the Times reports, Queen Elizabeth and Prince Philip could be relocated from London to an undisclosed safe location if riots are triggered by a no-deal Brexit. "These emergency evacuation plans have been in existence since the Cold War, but have now been repurposed in the event of civil disorder following a no-deal Brexit," an unnamed Cabinet Office source told the newspaper.

According to the Times, the plans — initially titled Operation Candid — were originally established after the Cuban missile crisis in 1962, and involved the Queen being evacuated by sea should the Soviet Union launch a nuclear weapon.

Dai Davies, previously Scotland Yard's head of royal protection, told the newspaper, "If there were problems in London, clearly you would remove the royal family away from those key sites." He added, "This is a measure that is extremely unlikely to come to pass. [But] the powers-that-be need to have contingency plans for any eventuality."

An unnamed government source said, "The decision to evacuate members of the royal family is based on whether or not their safety is compromised," stressing that "right now we have no concern about their safety."

The Queen has made several comments recently which have been perceived as references to Brexit, despite her typically apolitical public stance. Speaking at the Sandringham Women's Institute in January, as the Guardian reports, she commented on the "challenges and opportunities" experienced by each generation, saying, "As we look for new answers in the modern age, I for one prefer the tried and tested recipes, like speaking well of each other and respecting different points of view; coming together to seek out the common ground; and never losing sight of the bigger picture."

In her Christmas Day speech in 2018, she conveyed a similar message, saying, "Even with the most deeply held differences, treating the other person with respect and as a fellow human being is always a good first step towards greater understanding."

The news of a royal evacuation plan comes after weeks of building concern from major UK and international businesses over Brexit. Most recently, Japanese car manufacturer Nissan announced it would not build an upcoming car model, the latest version of the X-Trail SUV, at its Sunderland plant, as reported by the Guardian. In 2016, Nissan said the model would be built in Sunderland despite the results of the Brexit referendum.

The company said in a statement, "The continued uncertainty around the UK’s future relationship with the EU is not helping companies like ours to plan for the future." Though Nissan said the jobs of the 6,700 staff at the Sunderland plant were not in danger, the Unite workers' union said, "We remain seriously concerned, though, that the apprenticeships and additional jobs that come with future investment, and which this community so desperately needs, will be lost."