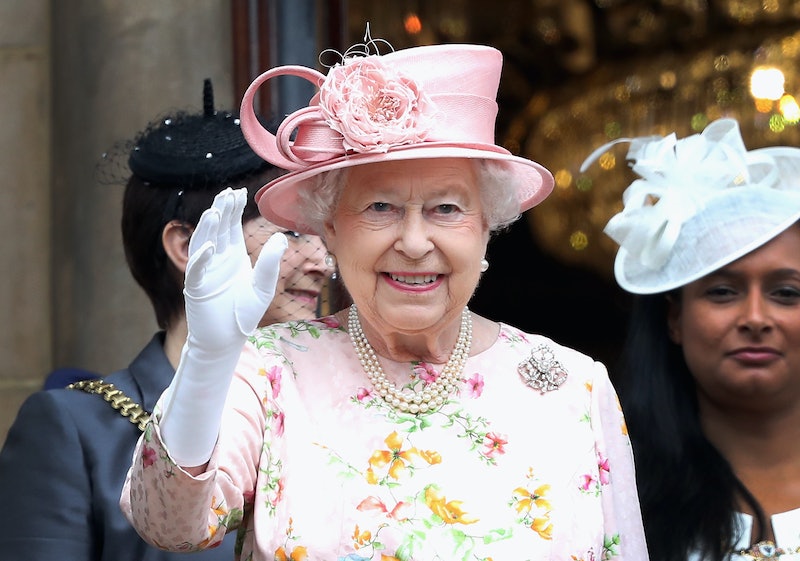 You had one job Queen. OK, kidding because let's be honest, all that waving must be knackering right? Poor old Lizzie must get some serious arm cramp and maybe even tennis elbow from all that waving and hand shaking she does. So the news that the Queen has a fake waving hand for when she's tired, makes a lot of sense.

But despite me totally understanding why the queen would need such a machine, she might not have ever actually used it. I know. Let me explain. In a recent book, as the Express reports, Princess Anne revealed the pretty lit gift the Queen received from some Australian students several years ago. Basically, they only flipping went and made her a fake hand on a stick waving machine. No lie. In a recent biography of the Queen's life, her daughter Anne said,

"They gave her a stuffed glove on a wooden lever so you could tweak the end of the lever and this hand went to and fro. I think they thought it was cheeky, but Her Majesty was thrilled."

The author of the book, Robert Hardman, went on to add that it became a bit of a running joke in the family. "The Queen was rather taken with it and I think it ended up at Balmoral. I don’t think she ever used it in public, but I hear it became a much-loved family joke," he wrote.

Who knew old Queenie had such a good sense of humour? And while it's not confirmed wether she actually used it or not, you couldn't blame her for whipping it out after a long day of waving. Or maybe she secretly has wildly powerful biceps that we don't know about. Stranger things have happened am I right? And, so it seems, have stranger gifts. The waving machine is just one of an absolute plethora of weird and wonderful gifts that the royal family has received over years.

In 1972 gave the family a pretty amusing present (not sure it was intentionally funny) when their president at the time, President Georges Pompidou gave them something wine related. Very French, and not that unusual, right? Well wait till you hear what it actually is. According to The Telegraph, he gave them a giant wine cooler in the shape of a grasshopper. Wow, now that is a bit left field. And that's not all. If you rotate the wings, it becomes a drinks table. Oh now it makes sense. A grasshopper-shaped table especially for drinks? Sign me up babes.

And it gets even weirder y'all. In 2014, Tatler reports that the Wellington Barracks thought, "I know what to get a gal who is hard to buy for —a box of mud". OK hold up, what? Well, not any old box of mud, but one from the World War One battlefields. Oh wow, so a sad box of mud as well.

What about a whole lot of treat yoself? Doesn't the Queen deserve to feel glam? To mix up her look a bit? Well, back in 1991 in a trip to America she was gifted her very own pair of rootin' tootin' cowboy boots, according to Buzzfeed. Yes, cowboy boots. OK bless them but like, I just don't see that fitting her aesthetic. Although in fairness, she could be a keen line dancer.

With all these weird and wonderful gifts, I'm starting to understand why the royal family has very specific rules about presents. Just wish I could relate to getting showered in freebies all the time. Sigh.