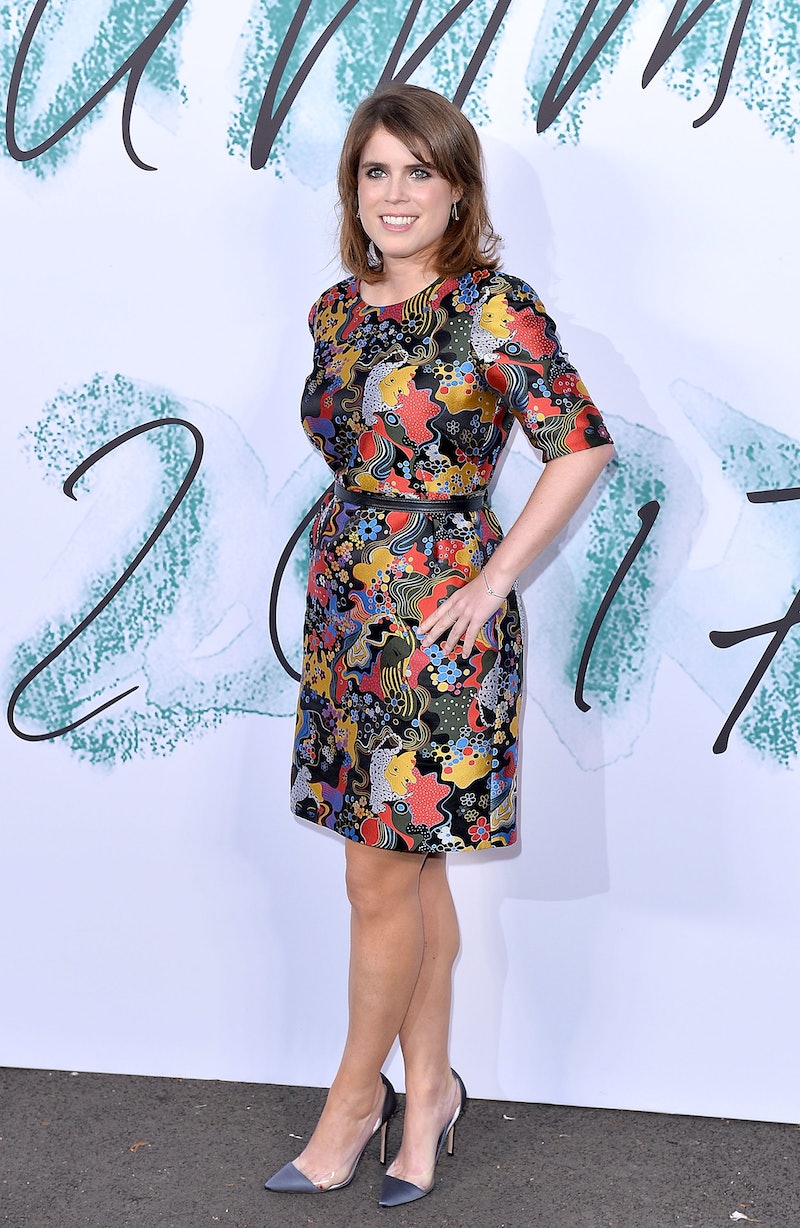 As her October 12 wedding approaches, there has been peaked interest in Princess Eugenie and her order of succession to the throne. As the youngest daughter of Prince Andrew, Duke of York, and Sarah Ferguson, Duchess of York, Eugenie falls ninth in line as heir to the British throne, according to Time. Due to her birth order, she lands just beneath older sister, Princess Beatrice of York.

As for the full layout of the royal family tree: Princess Eugenie's grandmother, Queen Elizabeth II, currently serves as the monarch of the U.K. Commonwealth with her uncle, Charles, Prince of Wales designated as the throne's successor. After that, Eugenie's cousin Prince William and his children, Prince George, Princess Charlotte, and Prince Louis come in at numbers two, three, four and five, respectively, in the line of succession. The newlywed Prince Harry falls next in line at number 6, followed by Eugenie's father, Prince Andrew, who comes in at 7, and her sister, Princess Beatrice, at number 8.

Although the Queen's current reign, which is notably the world’s longest at 66 years and counting, would seemingly suggest otherwise, Time noted that the British line of succession once followed a system of male preference where princes took precedence over their older sisters. However, a fairly new rule implemented in the 2013 Succession to the Crown Act amended the system so that males are no longer prioritized over older female siblings.

As the second member of the royal family to tie the knot this year, Eugenie and her fiancé Jack Brooksbank's nuptials are shaping up to be quite an extravagant affair. Similar to Prince Harry and Meghan Markle's wedding, which took place this past May, the couple will exchange vows at St. George’s Chapel in Windsor Castle while pulling out all of the bells and whistles of an royal event.

Eugenie and Brooksbank will have an extensive guest list for the affair – inviting more than 850 guests, according to Refinery29 – a number which is 250 more than the reported 600 people in attendance at Harry and Meghan's intimate ceremony this spring. Following formal tradition, Prince Andrew will walk his 28-year-old daughter down the aisle at the upcoming wedding, according to PopSugar.

Much like the itinerary for Meghan and Prince Harry's wedding, the newlyweds will be hosted by the Queen for a luncheon following the ceremony which will also take place at Windsor Castle. As the royal family transitions between venues, members of the public are invited to observe. As per a statement from The Royal Family:

"The couple are delighted Her Majesty The Queen has agreed for the grounds of Windsor Castle to be opened to those wishing to join the celebrations. After receiving over 100,000 applications, invitations have now gone out to the 1,200 members of the public who will join them on the day."

Eugenie and Brooksbank are also allegedly planning a lavish after-party, which will be held the day after the wedding. The bash sounds like it's going to be one for the books, with the Sunday Times reporting that the event will have “festival” theme that will be much more relaxed than the formal events of the day before. Entertainment Tonight reported that the party would include festival rides, food stalls, “loads” of cocktails, and “bloody marys for the hangovers.”

While still a member of British royalty, E! News noted that Eugenie appears to be allowed a bit more freedom than her cousins, William and Harry since she's further down the royal ladder in terms of taking the throne. It's worth pointing out that Eugenie's positioning will continually be pushed back should William and Harry — or her sister Beatrice — add more children to the family.

Although she may never be Queen, the lavish nature of Eugenie's impending nuptials prove that being ninth in succession isn't so bad after all.