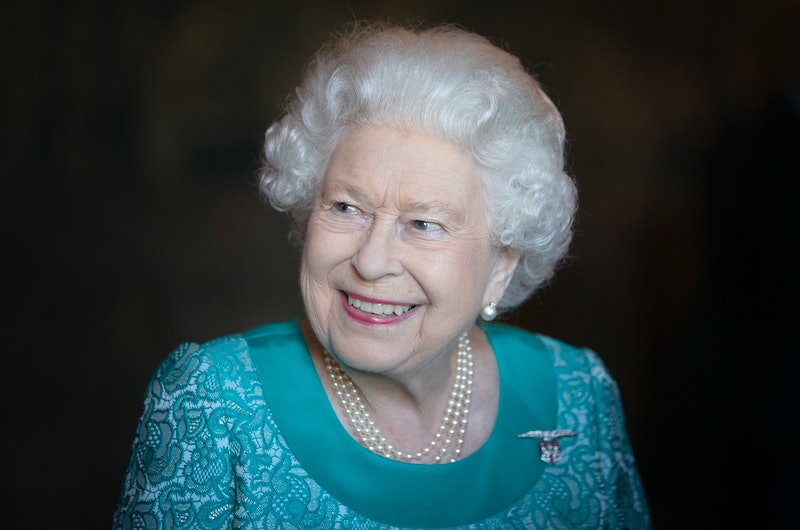 Job seekers on the hunt for their next crowning achievement are in luck: The Queen is hiring a full-time staffer. According to the Royal Household's official website, Buckingham Palace is looking fill the role of a kitchen porter, who will work with the kitchen team "to prepare and serve food to the very highest standards," per the official job listing.

And how's this for a job perk fit for a king or queen? The lucky hiree has the option to actually live in Buckingham Palace — with all meals provided. Should the employee need a break from the palace walls, though, the comprehensive benefits packages also includes a whopping 33 vacation days. That, of course, is in addition to other perks, including a pension plan on top of the approximately £19,935.80 annual salary (that's $26,000 in U.S. dollars).

According to the kitchen porter job description the chosen candidate will, on occasion, assist with food preparation, and that "by maintaining the kitchen and clear-up areas you'll ensure our chefs and assistants have all they need to deliver meals throughout the day." As Buckingham Palace is the Queen's London residence, the position will undoubtedly be a part of the operation to provide the Corgi-loving royal's daily meals.

While the posting for the five-days-per-week, full-time job does say that "previous experience is not necessary," Buckingham Palace's hiring managers do have some desired candidate qualities.

"Most important is that you’re a natural team player, happy to get involved, use initiative and work with your colleagues to achieve a smooth daily service," reads the online listing. "You clearly take care and pride in your work, and so aim to deliver great results in all that you do."

Other current full-time job openings at Buckingham Palace currently include: Palace Attendant, Assistant Housekeeper, and Sous Chef. Applicants, who can submit their resumes via an online submission form, are also required to be either a British citizen or cleared to work in the UK.

Working for the Queen got a rave review from at least one past employee: former Royal Chef Darren McGrady. "Cooking at Buckingham Palace was amazing," the chef — who's cooked for the Queen, Prince Philip, Princess Diana, and Princes William and Harry — told the Daily Mail in 2016. "It was everything I expected it to be. They have the most amazing produce, the best quality food, the best ingredients to work with. Just little things like picking up the phone and calling Harrods and asking for a rack of lamb with a two-inch eye of meat and six bones — you got everything you wanted."

McGrady also revealed some of the Queen's eating habits in an interview with Marie Claire last year. "At Buckingham Palace, we'd do a menu book that we'd send up to the Queen and she could choose the dishes she wanted," he explained to the publication. "The book would come back to the kitchen and we'd prepare them. The Queen's menus are done three or more days ahead and she sticks with them religiously."

Among her likes and dislikes, per McGrady's Marie Claire interview:

The Queen loves to eat any food from the estate — so game birds, pheasants, grouse, partridge — she loves those to be on the menu. But of course, she loves chocolate. That was her favorite, and it has to be dark chocolate. The darker the chocolate, the better ... The queen would never have garlic on the menu. She hated the smell of it, she hated the taste of it.

With all of Buckingham Palace's perks, it seems that working — and possibly living — there would royally rule.