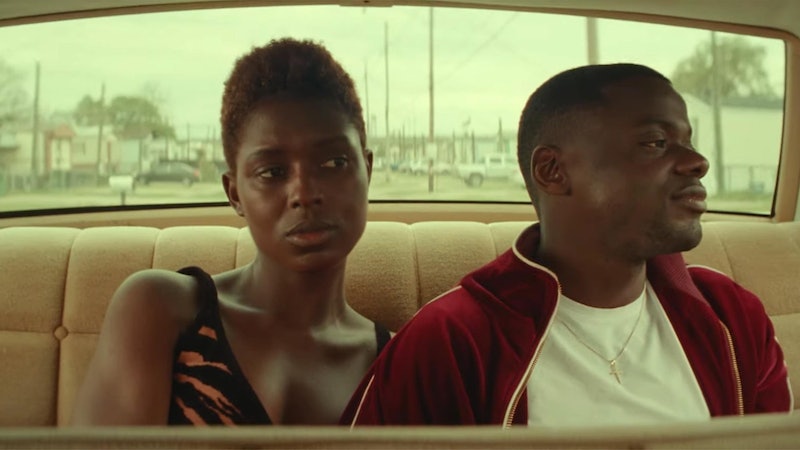 The upcoming dramatic thriller Queen & Slim centers on a police stop gone wrong, and the cast and crew of the film understand how important it was to portray that properly. In fact, Queen & Slim stars Daniel Kaluuya and Jodie Turner-Smith said they watched the Sandra Bland video before filming some of the movie's most most intense scenes — particularly, the tragic traffic stop.

The Queen & Slim stars opened up about getting inspiration from real life events in a roundtable interview for Entertainment Weekly alongside screenwriter Lena Waithe and director Melina Matsoukas. The movie, which Waithe described as a "rebel cry" as well as a love story, kicks off with a couple who get pulled over by the police on their way home from a date. After the situation escalates tragically and Slim shoots an officer in self-defense, he and Queen hit the road and fall in love while becoming the face of a movement.

The film isn't inspired by a specific true story, though it has been likened to Bonnie and Clyde, but it was definitely inspired by real life. "There was so much reality in it, of just this is the experience of being a black woman," Turner Smith said. She added that, to film the traffic stop, she needed only to look around her. "I watched the Sandra Bland documentary [Say Her Name] and her tape itself over and over and over and over again," Turner-Smith told EW, saying she especially tried to sit with "the reality of that, the fear in that."

Bland, a black woman, died in police custody in 2015 after she was pulled over during a traffic stop, and arrested in Texas. While dashcam footage of her arrest was made public at the time, her own, personally recorded cell phone footage of the event didn't become public until May of 2019. Speaking with EW, Kaluuya added that he watched her video of the 2015 traffic stop with Turner-Smith ahead of filming Slim's confrontation with a police officer.

The shoot itself was difficult, both emotionally and otherwise, but the cast and crew felt it was all part of the process of honoring victims of police brutality. "There were so many obstacles on the set and I always say, I feel like it had to be that," Matsoukas said. "It had to be hard shoot, because we were honoring all these people whose lives were taken because of police brutality."

Despite finding inspiration in so many tragedies, Queen & Slim is also a celebration of the black community for the film's creative team. "One of the special things about the movie is that it was sort of born out of the black renaissance in which we’re living in right now," Waithe said, adding that the movie was equally inspired by "the trauma of being black in America" and the feeling of being in love.