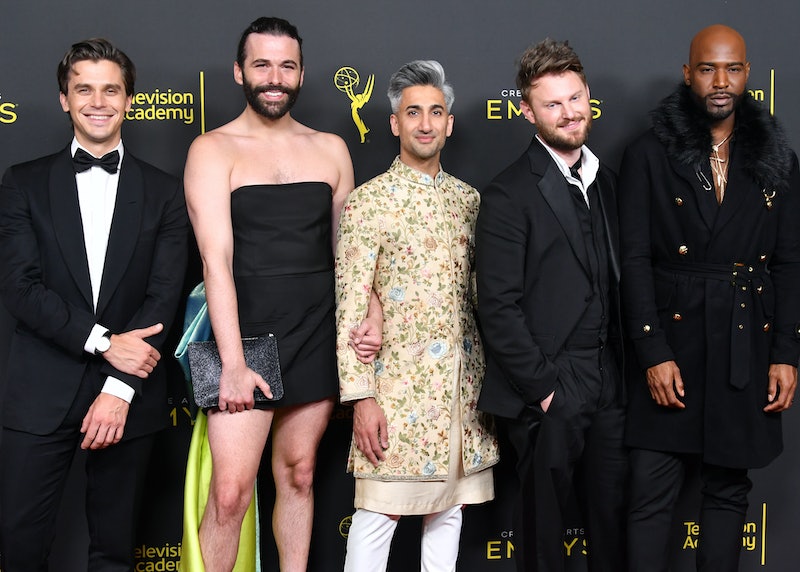 When Queer Eye for the Straight Guy wrapped filming in 2007, its creators and producers thought it was done for good. And when it won the Outstanding Reality program Emmy in 2004, they had no clue that 15 years later, the Queer Eye reboot would win its second Emmy, that its five stars would become icons for queer visibility, and that the show would have a massive, growing fanbase that shows no sign of dwindling. Queer Eye isn't just a reality show — it has become a movement, and that's exactly what creator David Collins wanted, to "turn the red states pink, one makeover at a time."

On Saturday, Sept. 14, Queer Eye took home four Emmys, including it's second for Best Structured Reality Program. Per Deadline, executive producer Rob Eric explained why he feels the Netflix series resonates so much with audiences. "Queer Eye is about visibility for gay men and women," Eric said. "This show is about, We're here, .. talking about our husbands, talking about our wives. The big difference between the two shows, I think we get to know them (the hosts) more. This iteration, (is about) having them come into your home and be part of your family (instead of just watching them)."

In April, the show's unapologetically boisterous and inquisitive grooming expert Jonathan Van Ness interviewed Collins about the show's origin story on his podcast, Getting Curious. Collins told him that the idea came in an epiphanic moment as he and his husband watched a woman publicly berate hers for his unkempt appearance. It was then that Collins realized the woman's husband needed something she didn't have: a queer eye.

When the original program dropped on Bravo in 2003, it was a cultural explosion of its own. It introduced the LGBTQ+ community to a country that was weary of it, to say the least. "It started to creep gay men into a mainstream lexicon that did change minds and it did move hearts," Van Ness said on the podcast. Still, there were many conversations that went intentionally untouched.

"They were superheroes," Collins said of the original Fab Five, Ted Allen, Carson Kressley, Kyan Douglas, Thom Filicia and Jai Rodriguez. "They swooped in and saved the day and then they swooped back out, because that's all America was ready for back then. America didn't want to know, really, who they were."

When the reboot was picked up by Netflix, Collins knew that visibility would be the core difference. "[There was] a new generation of gay men out there who have stories and lives and histories that they want to share and tell," he said. He picked the new Fab Five — Bobby Berk, Karamo Brown, Tan France, Antoni Porowski, and Van Ness — because they "each had such unique stories," and together, they would impact lives and make change.

After filming in conservative areas like deep Georgia, Kansas City, and suburban Illinois, and in some cases being the first gay interaction for their hero, as they call them, in 2019, the show won its second consecutive Emmy award for Structured Reality Program. And Van Ness' satirical Game of Thrones recap web series, Gay of Thrones, nabbed its third nomination. Although it didn't get the win, recognition for both shows are victories that took representation a rung higher than it was before.

"#GayofThrones didn’t get the Emmy last night. But it did receive 3 nominations over the course of its run & 6 years ago when we started it before the catagory [sic] existed it was certainly beyond my wildest dreams," Van Ness wrote on Twitter. "While a win would’ve been stunning 3 nominations in this category shows inclusivity & diversity matter and the honor to bring that has been that of a lifetime."

Game of Thrones may be over, but Queer Eye isn't, and as long as there are minds to be opened, their unique stories and impassioned activism will have space in America's queue.

More like this
Ozzie’s Coming Out Scene With Kitty On 'That ’90s Show' Has Twitter Sobbing
By Brad Witter
Love Is Blind’s Natalie Claims Shayne Signed Up For 'Perfect Match' While They Were “Still Together”
By Brad Witter
'Love Is Blind: After The Altar' Season 3 Has A Release Date & It's Very Soon
By Grace Wehniainen
Brittany Snow Files For Divorce From Tyler Stanaland After 'Selling The OC' Drama
By Grace Wehniainen and Radhika Menon
Get Even More From Bustle — Sign Up For The Newsletter
From hair trends to relationship advice, our daily newsletter has everything you need to sound like a person who’s on TikTok, even if you aren’t.