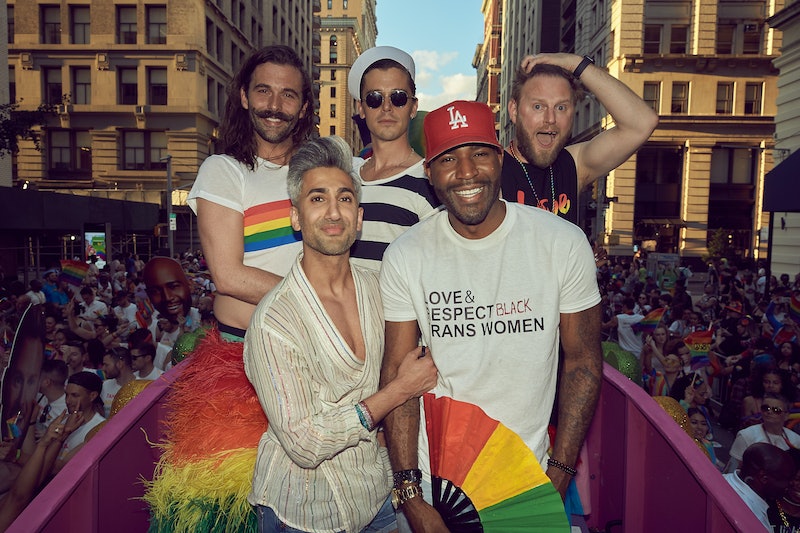 Queer Eye's Fab Five knows how to party, especially when it comes to Pride. Bustle joined the Queer Eye cast's epic Pride celebration in New York City at the World Pride Parade on Sunday June 30, which included a float for the Netflix show, a surprise proposal, and some fun cameos, among other things.

The day started off with a brunch party, which featured some fun Pride themed shirts that read, "Tan & Bobby & Antoni & Karamo & Jonathan" in rainbow lettering, with "Love Your Pride" written on the back. Next, the Fab Five used their time prepping for the World Pride Parade as a chance to share their take on what Pride means to them with Bustle's Social Media Editor Hannah Caldwell over on our site's Instagram Story. The cast members talked about everything from the past to the future, and their words are definitely worth repeating.

While wearing a shirt that read "Love & Respect Black Trans Women," Queer Eye's culture expert Karamo Brown reminded people to think about Pride's beginnings at the Stonewall Inn in New York City, and the trans women who pioneered the movement. "Remember one thing," he said, "that Pride is about remembering where we came from. Trans women started Pride. Let's continue the fight but also celebrate where we are."

Meanwhile, the show's food and wine expert Antoni Porowski kept it simple, saying, "I celebrate Pride year-round by being the truest, most honest version of myself that I can be."

Grooming expert Jonathan Van Ness took a more political approach to the future of Pride: "We have to fight harder than ever." Speaking about the upcoming election and the importance of getting involved, Van Ness said, "We have the most consequential presidential election coming up next year, so it's really about registering our friends ... and making sure that we are talking about equal rights ... to make sure that our hard work and progress is not going to be lost in 2020."

"For me," Bobby Berk, the interior design expert, explained, "Pride is all about remembering the people who have fought that allow us to be able to have a Pride, but also remembering the fight that we still need to keep up. We can't get complacent, we can't get lazy. Unfortunately, we gotta keep fighting for our rights every day."

Style expert Tan France told Bustle that he celebrates by living authentically. "I am honest with the people in my life," he said, "and I don't hide the beauty of the queer community. There's no reason for us to hide away. And so ... be honest at all times about who we are, what we represent, and how beautiful it is to be queer."

While much of their discussion looked to the future, the parade was a chance to live in the present. The Fab Five looked like royalty on the Queer Eye float, but they weren't the only ones: Some past Queer Eye heroes also joined in on the fun.

Skyler Jay, from the Season 2 episode "Sky's the Limit" and Jess Guilbeaux, from Season 3's "Black Girl Magic," were on the float. Both Jay, who identifies as trans, and Guilbeaux, a lesbian, had spoken on their episodes about struggles they'd faced after coming out, but being on the show helped them on their journey to self-love. Seeing them continue to celebrate themselves and their community is so inspiring, and it's also nice that the Fab Five keeps in touch with their heroes.

The most swoon-worthy highlight of the day, however, was Queer Eye fan Joseph Alcantara's proposal to his partner Ryan from atop the float, with the Fab Five (and the rest of the parade) watching on gleefully. His proposal got an immediate yes, of course, making it the perfect conclusion to World Pride Day.

The Fab Five continues to uplift and amaze, and World Pride was no exception. Congrats to the happy couple, and happy Pride (because yes, it is year-round).