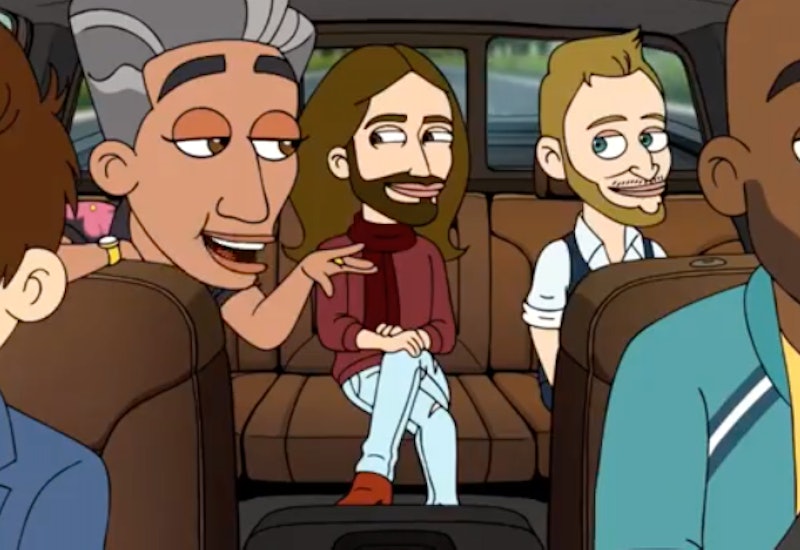 Spoilers ahead for Big Mouth Season 3. Since Season 1, fans have been acknowledging how much work Bobby Berk does on Queer Eye in comparison to his co-stars. Sure, the work that Tan France, Antoni Porowski, Karamo Brown, and Jonathan Van Ness do is important too, but Bobby's dramatic home renovations are just next level. This disparity in this amount of work was finally addressed in the Big Mouth Queer Eye parody in Season 3, Episode 10. The show brought on the Fab Five (voiced by the Queer Eye stars themselves) to help makeover a jobless Coach Steve, and Bobby finally pointed out how much goes into what he does on the show.

"So guys, while you were cutting Steve's hair, telling him how he feels, and buying him a shirt, I renovated his entire f*cking home," Bobby says in Big Mouth, unveiling Coach Steve's new house. He still lives on a garbage barge full of dirty diapers, but the inside of his home is beautiful. And Bobby, who is so thoughtful in addition to being talented with tools, happily tells Steve that he even framed his favorite dirty diaper "as a nod to the history of the barge."

It's touching to see Bobby get the recognition fans have been seeking for him for so long.

His work stands in even more of a contrast on Big Mouth than on Queer Eye, because the show gently mocked the rest of the hosts' contributions to Coach Steve's makeover. In the episode, Antoni doesn't heed warnings not to make food because they're on an island surrounded by hungry seagulls. Tan does his usual French tuck but not much more. JVN's hair transformation goes pretty much unnoticed by the easily distracted Coach Steve. And Karamo's lesson to say "no" to more things backfires when Steve turns down a high-paying job.

Meanwhile, Bobby was just up to his usual greatness.

On the actual Queer Eye show, most of the cast has a week to makeover the episode's subject (called a "hero"), although they typically only need a day. (How long can shopping and a haircut and learning how to make a salad take, really?) Meanwhile, Bobby told O magazine that he's often on site two weeks earlier than everyone else to plan his renovation. He has to make sure appliances are on standby, furniture is ordered, floor plans are studied, etc. before he even gets started on the actual demolition and rebuilding. Then, once that process begins, Bobby says he and his team have to get all the work done from Tuesday to Friday — no more, no less.

That would be hard enough on its own, but Bobby has also run into problems during the renovation that he had to push through to make the tight timeline. He told O magazine that he ran into a huge termite issue in Season 2 on Mayor Ted's house and had to do way more demolition than he'd planned for. And when a storm during the Season 3 camp episode knocked out the power, Bobby and his team pressed on, doing demo and painting by flashlight and iPhone light. One time, none of his pre-ordered furniture showed up, so he traveled around Atlanta trying to get everything he needed last minute. Then there was the time when he completely redid Wesley Hamilton's house to make it accessible for Wesley, who uses a wheelchair.

Bobby also always puts a ton of thought into each renovation project by framing special memories, engraving sweet messages into furniture, and more. He doesn't have a cookie cutter mold that he just throws into each new space. He told Architectural Digest that he religiously reads the one-sheet they all get on the hero and susses out small details about their personality that he can use in their new decor.

"The only thing I had to go on for Remi in [Season 1], Episode 6 is that he wanted to be in advertising, he loved Mad Men, and he wanted to go to Cuba one day," Bobby said. So he transformed the home using '50s Cuban style. Bobby said that Remi couldn't believe how closely Bobby had captured his sense of style without Remi even saying anything.

Bobby did acknowledge to O magazine that he does more actual labor than his co-stars, but he generously spotlighted their own talents as well. "Is my job more labor intensive? Yes, that's just the nature of the beast," Bobby said, adding:

"But, my job isn't any more important than theirs. Our show wouldn't be what it was without ... Karamo figuring out what's wrong on the inside, Antoni teaching them good life lessons with cooking, Tan and Jonathan teaching them to love themselves again and that the way they are is perfect, and me making sure they don't fall back into a rut at home."

He especially sung Karamo's praises in an interview with People, where Bobby actually said that he believes Karamo has the hardest job on the show. "Every week, he has to reinvent what he does, because his job is really to get at the core of how we can help them emotionally with their self-esteem and their self-care and their love," Bobby said. "Whereas every week I might not know how big the job's going to be, but I know I'm remodeling something. So, I'm in the game already."

It is very Bobby of him to make sure no one goes unmentioned for what they do, but it was exciting to see him take ownership in Big Mouth over the impressive amount of work he does on a week to week basis for Queer Eye's heroes. The show works because of all five of the men, but Bobby's transformations are truly out of this world. And now fans can rest assured that he knows it too. Now, let's just hope Steve can keep his renovated garbage barge together.