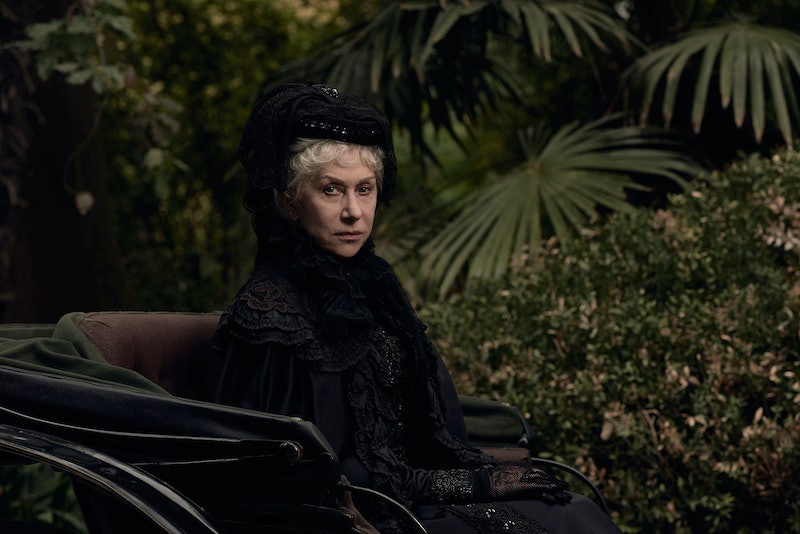 The scariest part of the upcoming horror film Winchester: The House That Ghosts Built is the fact that it's based on reality. The filmmakers didn't have to stretch too far to come up with a terrifying plot because it comes ripped straight from the pages of history, and the real-life monument certainly lives up to its haunting reputation. The Helen Mirren-starring movie (in production and slated for a February 2018 release) attempts to unpack the mystery surrounding Sarah Winchester and the logic-defying Winchester Mystery House in San Jose, Calif., and based on the baffling history, layout, and facts of the mansion and its designer, it's clear that the producer and directors didn't have to embellish all that much when it came to making a nightmare-inducing movie, shot both on the actual location of the house and in studio with recreations and replicas of the set.

Known as one of the most haunted places in history, the sprawling Winchester mansion was built around the clock, with remodels and expansions being added 24/7 and without interruption by Sarah Winchester (played by Mirren) from 1884 until 1922, and all construction on the house only ceased (abruptly) when Sarah died. At one point it even stood seven stories tall, until the infamous 1906 earthquake damaged the structure, taking down the top three floors.

Not even a year after Sarah's passing, the Winchester house was opened up as a tourist attraction in 1923 because of its legendary status. The massive, maze-like mansion is said to have been built to keep out ghosts and spirits of all the victims killed by the Winchester rifles, invented by Sarah's husband's family.

Sarah's wild designs for the never ending project came about after both her husband and newborn child died, and she became spooked by a medium, Adam Coons, telling her she needed to move west and build the house to appease the spirits seeking vengeance for their wrongful deaths. And walking through the rickety halls of the Winchester Mystery House on a hot day in late October, as I noticed stairways that lead straight up to the ceiling and doors that lead to nowhere with a three story drop, most of the 160-plus rooms popping up with no rhyme or reason, it became obvious that something besides logic was driving the design of the house. Maybe there is more to the story than a crazy old woman living out her final days in fear of her past. Maybe she truly did have something to fear in the present.

Now listen, I'm no believer. I don't put any stock in the supernatural. I love watching supernatural and fantastical stories on TV and in movies, but that's where my beliefs end. However, over the course of one day in the Winchester Mystery House, that solid non-belief changed into doubt. The Victorian-dressed tour guide leading me with a small group of press along with the directors Michael and Peter Spierig and producer Tim McGahan through the house explained that Sarah would listen to spirits telling her how to precisely design each room.

Supposedly each room was replicated exactly the same way as the rooms where victims died, killed by the Winchester rifle, as to entrap vengeful spirits in their own personal hell. Not only that, but the halls and staircases and rooms were laid out dizzyingly, and it was easier to get lost than be able to find the way out. If I wasn't being led the right way, I never would have escaped on my own. Even the Spierig brothers admitted to getting lost while filming on location.

During my first tour during the late afternoon, with the hot sun blazing overhead and washing the historical house in a golden light, the house didn't seem haunted. It just seemed mildly creepy with its nonsensical design and incompleteness. I stepped over the threshold of the front door that Sarah didn't allow anyone but herself to use, and I was almost disappointed with how normal the house felt. It was old-fashioned, sure, and gigantic, but not haunted. Or so I thought.

Later that same night, as another tour guide took the group back through the pitch-black house for a candlelit tour, I completely lost it. I was expecting the same tour as before, but the Winchester Mystery House completely transforms for these candlelit tours, and it became a truly haunted house experience. Actors dressed in old-fashioned costumes and ghoulish makeup roamed the halls silently, not jumping out at you but instead waiting for you to notice them breathing down your neck or staring at you from down a dark hall. Some would just stand still in a corner, not moving or speaking at all. Rocking chairs rocked on their own. Floors creaked with footsteps but no one would be there. The faint sounds of a piano could be heard from some far away room, and the sounds of construction continued on into the night.

At one point, while I was looking intently at a shadow since no one was around to cast it, a large pile of boxes fell towards me out of nowhere and no joke, I screamed the loudest I've ever screamed in my entire life (at least 15 people can confirm this embarrassing story). Sure, most of the scares came from the manufactured tourist attraction and people who worked at the Mystery House, but it was my conversation with the Spierig brothers before the candlelit tour began that instilled a real, true fear in me about the building that stayed with me to this day.

"It feels like a never ending, living thing and you'll get that sense in the film," Peter says of the real house. "We put as much of the true story as we could in the film. It’s a blend with the two: it’s a ghost story, and it’s a true story."

His brother Michael agrees, noting that while they added in actual, physical ghosts to their film, taking creative liberties for entertainment purposes, he doesn't believe that Sarah was crazy with her beliefs that spirits were haunting her.

"I don't think she was crazy at all, I think she was very sad," Michael says. "I think with the loss of her daughter first and then her husband crippled her and destroyed her emotionally. I think she was misunderstood and in mourning."

That's a belief that Mirren apparently shares with the filmmakers. Michael reveals that in all of her research of Sarah's life, the film's star Mirren "formed strong opinions" about Sarah's sanity and why she built the house, and will defend her passionately whenever given the chance. If a legend like Mirren and horror experts like the Spierig brothers all believe in Sarah's cause, that's enough for me. I'm just glad I made it out of the Winchester house alive to see the film debut in just a few short months.