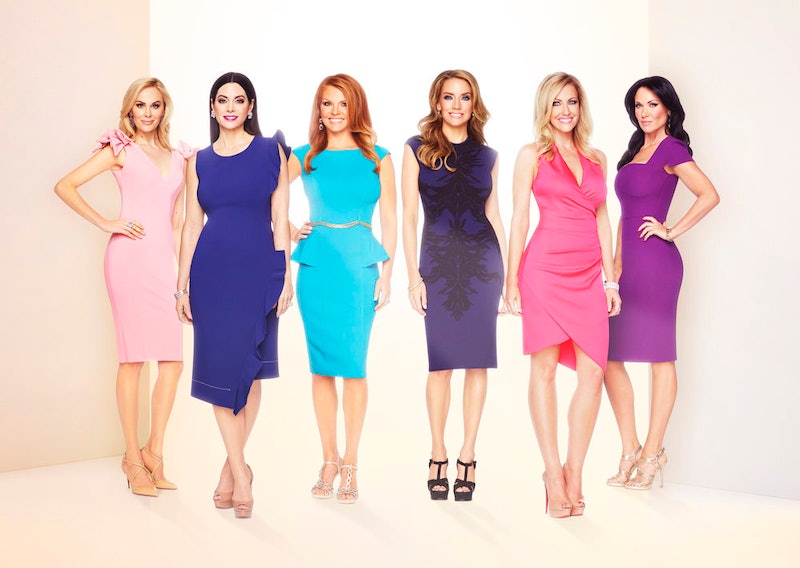 The new season won't premiere until Aug. 14, but, if the new Real Housewives of Dallas taglines are any indication, LeeAnne Locken is going to be running the show this time around. She has a lot of work to do to rebuild her friendships with the other ladies after last season, but her tagline suggests she's on the offensive, not the defensive. In fact, some of LeeAnne's co-stars might want to consider reaching out to her to mend some fences. From the looks of it, a lot of these ladies could use some pointers.

The perfect tagline combines wit, confidence, self-awareness, a touch of shade, and ideally a reference to the city you hail from. Most of the other women check off two to three of the other boxes, or maybe even four, which is a strong start. But LeeAnne is coming in hot with all five, so familiar faces Stephanie Hollman, Brandi Redmond, and Cary Deuber, and newcomers D'Andra Simmons and Kameron Westcott, should sit up and pay attention.

Who knows what will actually go down on-screen, but taglines are forever, and they set the tone for the season. LeeAnne has set the bar high, so the other Housewives are really going to have to scramble to catch up.

"I cheer for the Cowboys, so I never get played." — Brandi

This is a pretty strong showing from Brandi. We've got the Dallas reference with the Cowboys, confidence about her job, and a touch of shade to the other ladies trying to play her. Season 1 seems to have served her well, although it would've been nice to see her branch out from her original line a bit more.

"I married into money, but family is my fortune." —Stephanie

It's smart of Stephanie to bring up the fact that she married into money before someone else can try to use it against her, but her tagline is pretty weak. At least last season she had a fun take on a classic line. This new one is just vanilla.

"Every girl has skeletons in her closet — mine are next to my Birkins." —Cary

No offense, but this is not her best. Hopes were high after last season, but this quip gives almost no information about her. It's vaguely a brag because she owns multiple Birkins, but there's nothing beyond that.

"I started from the Dallas Dynasty, but I'll finish with my own empire." —D'Andra

This newcomer and Dallas society girl does pretty well with herself in her first tag line. We have the Dallas reference, the boast of being from a family of millionaires, and a promise to make her own mark on the franchise. No humor, unfortunately, but all in all, not half bad.

See, now this is another one of the weakest of the bunch. Kameron is probably a lovely person, and fans are undoubtedly excited to meet her, but what does this tagline even mean? It has the germ of an idea, but she doesn't say which of the two she is, so there's no oomph behind it. Plus, this could really be a line from any franchise; where's the love for Dallas?

Finally, the line we've all been waiting for, and it has everything. Texan pride, self-awareness of her own prickly personality, humor, shade at the other women... it's perfect. And if this is how well she nails the tagline, everybody better sleep with one eye open.

See you right back here on Aug. 14 to see if the show is shady as these taglines are suggesting.